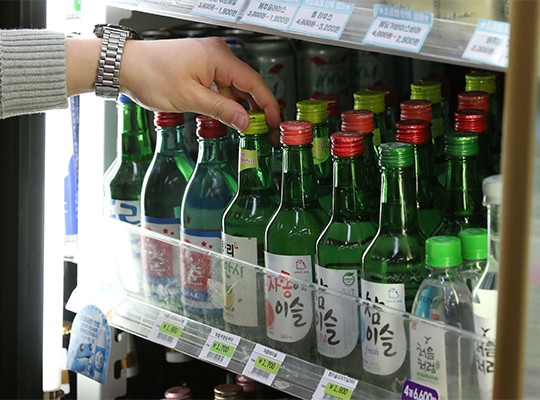 According to data released by Statistics Korea on Thursday, monthly income of households in the bottom 20 percent bracket averaged 1.64 million won ($1,483) in the final quarter of last year, up 1.7 percent from the same period a year ago. The monthly average income for the top 20 percent rose by faster pace of 2.7 percent to 10.03 million won during the same period.

Despite the increase, earned income for the bottom cadre plunged 13.2 percent to 596,000 won, whereas that of the top group increased 1.8 percent to 7.214 million won.

The income quintile share ratio, reflecting the extent of inequality in income distribution by dividing average income of the highest 20 percent bracket with that of the lowest 20 percent bracket, came to 4.72 in the fourth quarter, rising from 4.64 in the same period a year earlier.

Income from wages and business fell for three straight quarters, the longest double dip since data has been compiled from 2003.

The earned income of all households averaged 3.401 million won in the October-December period, down 0.5 percent from a year ago.

The transfer income of households – mainly social benefits - rose 25.1 percent in the fourth quarter due to a series of relief handouts. Overall household income rose 1.8 percent from a year ago. 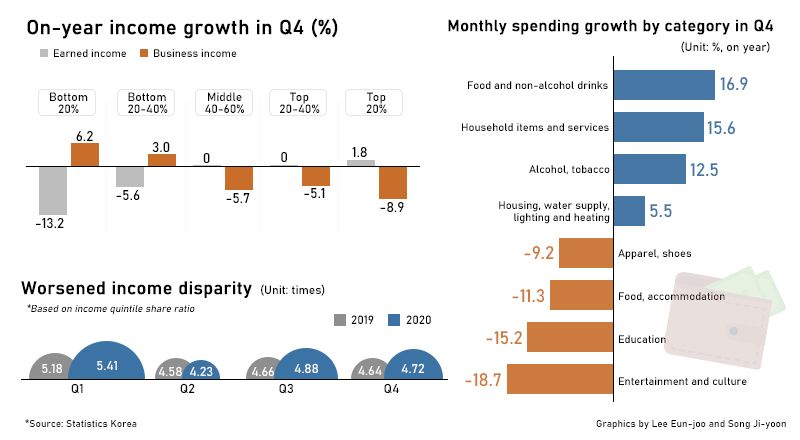 Chung Dong-myung, head of Statistics Korea’s social statistics planning division, said that earned income in parallel with the loss of more than 440,000 in payroll in the fourth quarter. Business income also fell due to a drop in the number of self-employed businesses coupled with the sluggish business environment.

Average monthly household spending fell 0.1 percent to 2.907 million won in the fourth quarter after a 1.4 percent drop in the third quarter.

Spending on service industries such as entertainment and culture, and dining and accommodation as well as education plummeted, whereas expenditures on food and non-alcohol beverages (16.9 percent), household items and services (15.6 percent), and healthcare (8.5 percent) rose as people were forced to eat and entertain themselves at home under social-distancing rules. Spending on housing, water supply, and light and heating jumped 5.5 percent and those on alcohol and tobacco 12.5 percent on year to average 40,000 won per month.