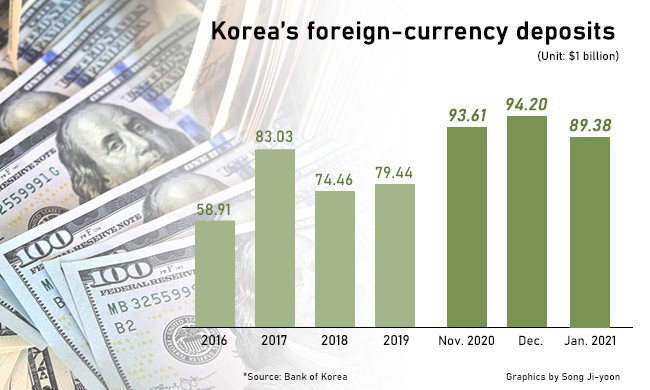 이미지 확대
The outstanding balance in foreign currency deposits held in South Korea thinned last month from a record high in December due to strengthening in the U.S. dollar, data showed.

The balance in FX deposits held by institutions, Korean nationals and non-nationals residing in the country for more than six months came to $89.38 billion at the end of January, off $4.82 billion from a historic peak in December, according to the Bank of Korea.

The trim in the balance – the first since September last year - comes as the U.S. dollar turned stronger timed with the inauguration of Joe Biden presidency in the U.S., sending institutions and individuals to take profit. The greenback that averaged 1,086.3 won rose to 1,118.8 won in January.

FX deposits held by domestic banks reached $78.61 billion, down $46.1 from a month ago while deposits by foreign lenders dropped $210 million to $10.77 billion.

Corporate holdings of FX deposits stood at $69.68 billion, while individuals owned $19.7 billion, each declining $4.77 billion and $110 million from the previous month.