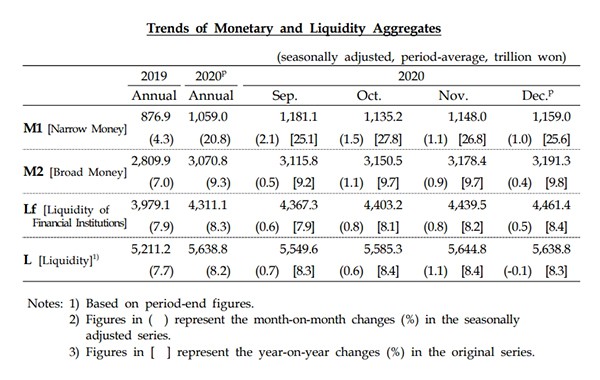 Money supply in South Korea has continued its growth momentum as households and companies build up on cash amid low interest rate and uncertainties from Covid-19.

The country’s M2 money supply reached 3,191.3 trillion won ($2.88 trillion) in December, up 0.4 percent from the previous month, according to the data released by the Bank of Korea on Wednesday.

The growth pace slowed down from 0.9 percent on-month gain in November, but the figure soared 9.8 percent compared with a year ago.

M2 is a broad measure of money supply and closely watched indicator for policymakers. It includes all liquid assets, such as cash and checking deposits, as well as less liquid forms, such as savings deposits, money market securities and mutual funds.

Funds owned by households and non-profit organizations grew 8.9 trillion won from a month ago in December and companies 5.4 trillion won. Other financial institutions saw a decline of 4.5 trillion won.

Deposits of two years or less increased at the fastest pace for businesses among other forms of funds, while demand deposits grew sharply for households, according to an official from the BOK.