The country’s FX reserve amounted to $443.1 billion at the end of December, up $6.72 billion from a month ago. This placed Korea’s FX reserve at a new record high for the seventh month in a row. The reserve has increased for nine consecutive months since April 2020.

The bank attributed the gain to an increase in value of non-dollar assets from the U.S dollar’s depreciation. The rise in financial institutions’ reserve deposits and higher returns from overseas investment also contributed, added the bank. 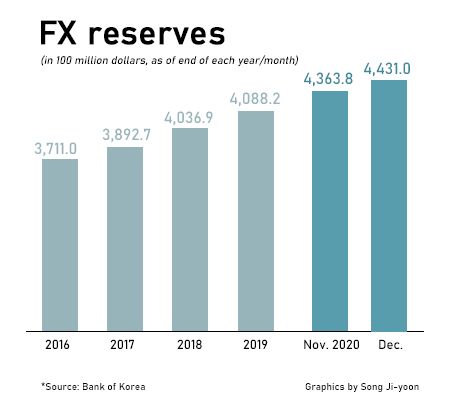 이미지 확대
The special drawing rights from the International Monetary Fund (IMF) rose by $420 million to $4.82 billion. The reserve position, or portion of required quota of currency held with the IMF that can be withdrawn, added $150 million to $3.37 billion.

Gold reserves, whose value is recorded at purchase price, stayed unchanged at $4.79 billion.

Cash deposits in foreign bank accounts, however, fell to $20.28 billion at end-December from $29.32 billion a month ago.

Korea held the world’s ninth-largest FX reserves as of end-November. The top three were China with $3.18 trillion, Japan with $1.38 trillion and Switzerland with $1.37 trillion.