South Korea shed nearly 1 million in January payroll, the biggest losses since massive layoffs executed in return for international bailout in late 1998, with the number of unemployed increasing by the largest on record as lengthening in Covid-19 crisis wreaked havoc on jobs.

According to data released by Statistics Korea, the number of employed came to 25.82 million in January, down 982,000 against a year-ago period. The figure marked the steepest on-year fall since December 1998, when the country lost 1.28 million jobs under IMF-led restructuring.

Jobs have been on a losing streak for 11 months since the virus outbreak in March last year, also the longest slump since 1998-1999 when job losses extended for 16 consecutive months.

The employment rate among those aged 15 and older fell 2.6 percentage points to 57.4 percent from a year ago – the lowest January figure since 2011. 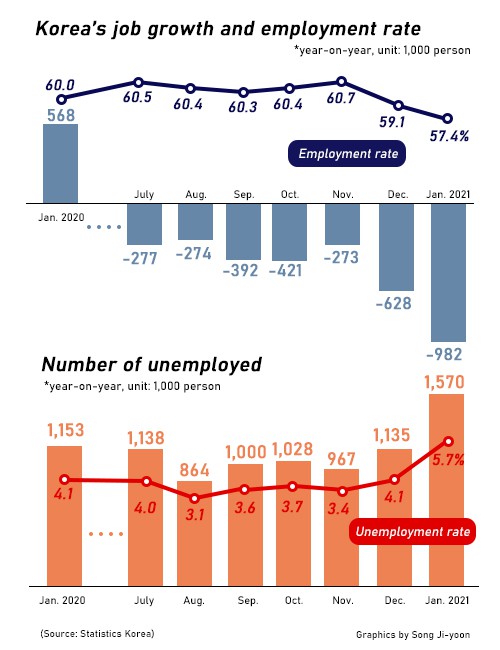 이미지 확대
Employment rate of Koreans aged 15 to 64 – the standard of the Organization for Economic Cooperation and Development (OECD) – was off 2.4 percentage points on year to 64.3 percent, also the worst for January since 2013.

The unemployment rate gained 1.6 percentage points from a year earlier to 5.7 percent.

“Personal contact services like accommodation, restaurant, retail and wholesale were hit the hardest amid toughened mitigation rules,” said Chung Dong-wook of Statistics Korea. “The dismal job figure was also attributed to a base effect from the previous year, when the number of new hires jumped by 568,000.”