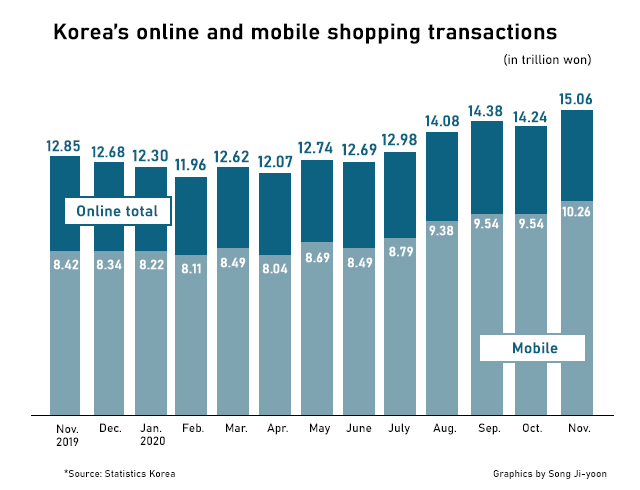 According to data released by Statistics Korea on Tuesday, the nation’s total online transaction volume in November amounted to 15.06 trillion won ($1.38 billion), up 5.8 percent from the previous month and 17.2 percent from a year ago.

The figure surpassed 15 trillion won for the first time since related date became available in January 2001.

Online shopping transactions have been on a steady rise since Covid-19 outbreak hit the country around February last year, building up to 12 trillion won in March to July and 14 trillion won in August.

They accounted for 63.3 percent of the total online transactions.

Food service recorded the highest year-over-year growth of 60.6 percent. But online sales for travel and transportation service plunged 52 percent and culture and leisure service 65.8 percent from a year ago due to the movement restrictions.

Online shopping took up 29.2 percent of the nation’s total retail sales in November except for service transactions, jumping from 23.1 percent in the same month a year earlier.

Mobile shopping transactions reached 10.26 trillion won, exceeding 10 trillion won for the first time since 2013 when the agency began compiling related data. The figure grew 7.5 percent from a month ago and 21.9 percent from the previous year.