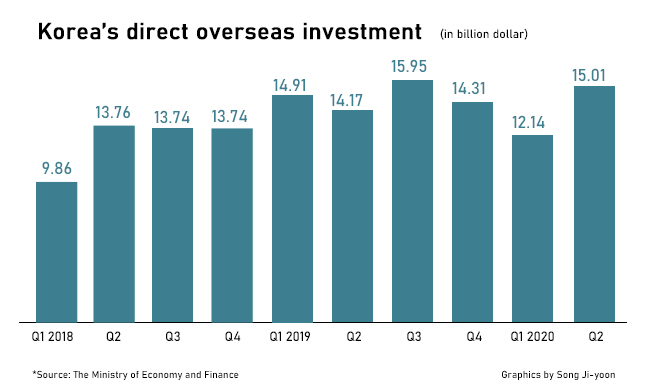 이미지 확대
South Korea’s overseas direct investment fell at the fastest pace in nearly two years in the second quarter as businesses had to save ammunitions against the fallouts from the COVID-19 pandemic.

The country’s offshore investment contracted 27.8 percent to $12.14 billion in the second quarter ended June from a year-ago period, according to the Ministry of Economy and Finance on Friday. It is the steepest on-year fall since the first quarter of 2018.

Net offshore direct investment in the second quarter was $7.61 billion, down 46 percent from a year earlier.

The COVID-19 pandemic took a direct hit to overseas investment in the second quarter. Manufactures cut most, investing $2.15 billion or 62.7 percent less compared to a year earlier Overseas investment by the finance and insurance sector, which accounted for largest 41.6 percent of total, shrank 21.3 percent to $5.05 billion.

The largest 30.1 percent of Korea’s direct overseas investment was made in Asia, followed by Central and South Americas (23.9 percent), North America (20.6 percent), Europe (16.0 percent), and the Middle East (5.8 percent).

By country, the Cayman Islands topped the list, accounting for 20.0 percent. Trailing behind were the United States (18.0 percent), Singapore (12.3 percent), and the United Arab Emirates (5.4 percent).