Asia’s fourth-largest economy was projected to shrink 1 percent instead of the 0.8 percent fall estimated in August, according to the OECD’s interim economic outlook report on Wednesday.

Korea’s negative growth would still be the mildest among the 37 OECD members and second among G20 economies after China.

The Paris-based agency in June had predicted the Korean gross domestic product to see negative growth of 1.2 percent but revised it up to -0.8 percent in August on the condition that there is no virus resurgence.

Korea, however, reported another spike of coronavirus cases in mid-August, prompting the government to strengthen social distancing in the capital Seoul and the surrounding area. The restrictions were eased earlier this week as daily new cases fell from the peak of more than 400 to low 100s.

The OECD predicted the Korean economy to grow 3.1 percent next year, unchanged from its June and August forecasts.

It projected faster recovery for China, the U.S. and the euro area. 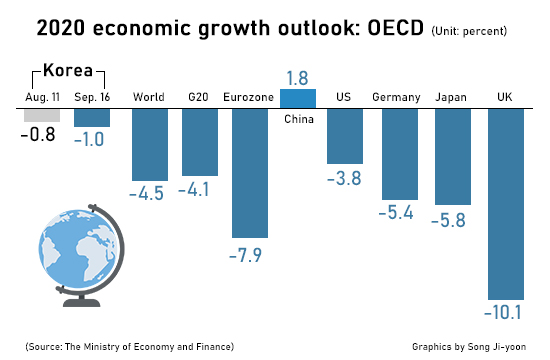 이미지 확대
The OECD said the Chinese economy would grow 1.8 percent this year, rather than contract 2.6 percent as estimated in June, making it the only G20 country to experience growth.

The U.S. economy was set to contract 3.8 percent, an upward revision from estimates made in June and July that had pointed to a 7.3 percent decline.

The German economy will shrink 5.4 percent instead of the 6.6 percent fall estimated in June. Japan’s GDP outlook was also revised up to -5.8 percent from -6.0 percent.

The OECD expected the global economy to perform better than expected, though it was still on track for an “unprecedented” decline in output. The world economy was predicted to contract 4.5 percent this year versus the previous forecast of -6.0 percent. Going forward, the OECD said the global economy would bounce back to 5.0 percent growth in 2021.

Forecasts were grimmer for the developing economies. India`s GDP outlook was sharply revised down to -10.2 percent from -3.7 percent. Brazil and Russia were forecast to contract by 6.5 percent and 7.3 percent, respectively.

By Yang Yeon-ho and Kim Hyo-jin