KDI negative about a meaningful rebound in 2021

이미지 확대
State think tank Korea Development projected the Korean economy to contract 1.1 percent this year, revised sharply down from 0.2 percent gain estimated in May and more or less in line with the Bank of Korea’s estimate of 1.3 percent fall.

The recovery in next year on the back of this year’s fall would stop at 3.5 percent due to delayed pickup in domestic demand, it said.

The government think tank usually is more optimistic than others on economic forecasts.

It added the annual recession could be deeper if virus spread does not die down in September and forces the country into a full-scale lockdown.

The BOK also estimated negative growth for 2020 could be 2.2 percent if virus woes last throughout the year.

The state institute did not see a sharp rebound next year as in the aftermath of the two last annual contractions in 1980 and 1998.

KDI said that Korea’s economy would at best grow at an average 1.2 percent - 1.1 percent negatively this year and 3.5 percent growth next year, - well underperforming its growth potential rate.

In May, KDI predicted private consumption to drop 2 percent this year before expanding 5.3 percent next year. In its revision, the think tank anticipated private consumption to fall 4.6 percent this year and expand 2.7 percent next year. It ruled out immediate recovery, citing limited spending activities amid virus infection fears and income fall due to sluggish economy. 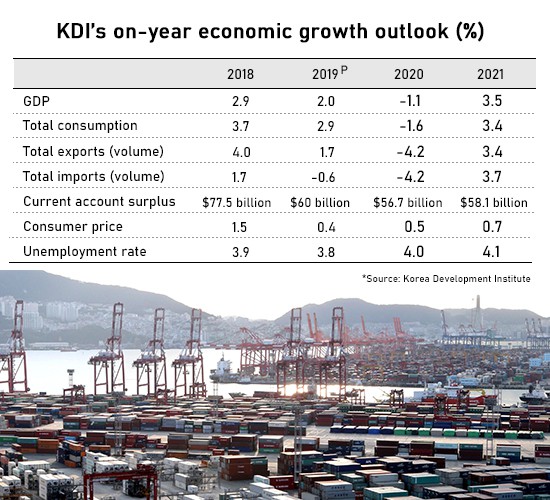 KDI projected Korea to record an account surplus of $57 billion this year and $58 billion next year.

KDI projected consumer prices to grow 0.5 percent this year and 0.7 percent next year. The number of employed people is expected to drop 150,000 this year before adding 150,000 next year.

An early development of COVID-19 treatment and vaccines and stable supply would accelerate economic growth led by service industry next year but the pace of economic recovery would be subdued under elevated social distancing measures. The conflict between world’s two largest economies the United States and China could also be an additional element pulling down growth, it said.

The government should also focus fiscal policy on protecting the vulnerable group affected by COVID-19 and set out policies that expand efficiency of fiscal spending. The KDI also proposed to maintain expansionary monetary policy to confront sluggish economy and low inflation.