According to data released by the Bank of Korea on Friday, the country’s current account surplus came to $7.45 billion in July, up from $6.88 billion in June and $6.58 billion in the same month a year ago. It was the biggest surplus in nine months since $7.8 billion in October, 2019.

In the January-July period, however, Korea’s current account surplus reached $26.6 billion, narrowing from $29.2 billion in the same period a year ago.

Exports, which represent more than half of Korea’s economy, fell 10.8 percent year over year to $43.2 billion in July. Outbound shipments of petrochemical products, automobile components fell, whereas those of information technology devices and semiconductors rose.

By country, exports to China where the COVID-19 outbreaks have been mostly contained increased for a second straight month while those to the United States also rose both on year and on month. 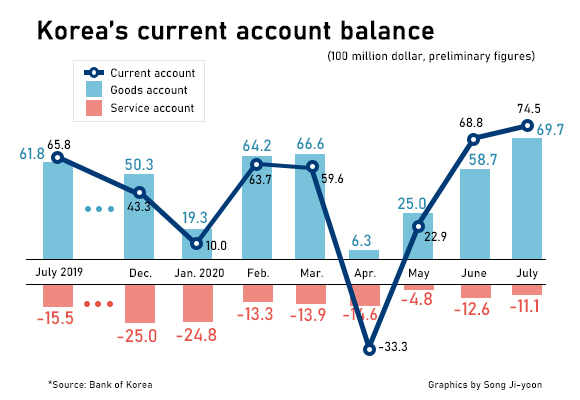 이미지 확대
A decline in imports, however, was steeper than that of exports, falling 14.2 percent on year to $36.2 billion in July. Imports of capital goods increased 7.2 percent, whereas those of raw materials and consumer goods fell 25.6 percent and 7.6 percent, respectively due to still subdued local consumption amid the lingering virus concerns.

The services account deficit narrowed to $1.1 billion in July from $1.26 billion in June and $1.55 billion in July last year on improved travel account as Koreans’ overseas travel practically came to a standstill due to the coronavirus pandemic.