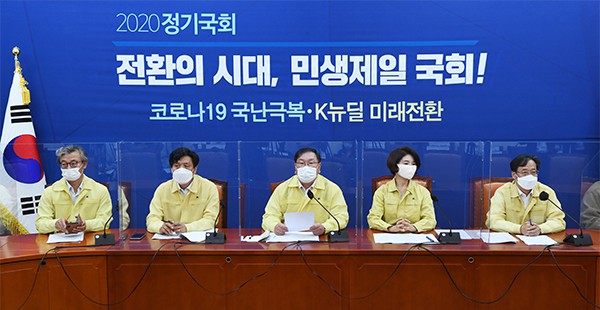 The South Korean government and ruling party are readying a fourth supplementary budget of 8 to 10 trillion won ($8.4 billion) as the country remains in semi-lockdown due to a resurgence of coronavirus cases.

The ruling Democratic Party and the Ministry of Economy and Finance on Thursday said they were drafting this year`s fourth extra budget to primarily rescue merchants and self-employed businesses hit hard by the extended social restrictions.

The capital Seoul and the surrounding region have been in quasi-lockdown since Sunday following a fresh surge of virus infections. Daily case counts that had hovered below 50 surged to three-digit figures in mid-August, peaking at more than 400 last week. The numbers have eased in recent days, with the country reporting 195 new cases on Thursday.

Eating out has been banned from 9:00 p.m. Public and private facilities of large groups such as gyms, karaoke bars and PC rooms have been forced to shut down.

The latest measure would be a lot more selective, with assistance to be directed towards certain small businesses and sectors heavily impacted by the coronavirus. Stimulus checks, such as the ones deployed to all households in May, won’t be considered.

Businesses forced to close under the toughened social distancing rules would be the first to benefit from the latest assistance, in the form of cash handouts or tax breaks. Travel agencies and other businesses struggling due to the protracted pandemic would also be included.

The finance ministry said the new package would have to be financed mostly through debt issues as earlier relief measures have nearly depleted state reserves. It added that it was aiming to unleash the package by the end of this month.