이미지 확대
South Korea’s industrial output in June made the fastest rebound in 11 years, helped by fiscal stimulus and relief actions against the coronavirus fallout.

The seasonally adjusted mining and manufacturing output in June jumped 7.2 percent from a month ago, bouncing back after two straight months of decline to mark the biggest gain since February 2009, Statistics Korea data showed Friday.

Against a year earlier, it was down 0.5 percent.

For the second quarter, factory output fell 7.1 percent versus the previous quarter and 5.1 percent from the year-ago period.

Factor operation averaged 68.3 in June, gaining 4.9 percentage points from the previous month but still subdued when compared to 72.2 a year ago. Inventory levels fell 1.4 percent on month but rose 2.0 percent from a year ago.

Weak global demand continued to weigh on manufacturing activity. Exports slipped 3.5 percent in June, although eased from the 12.8 percent dip in May. 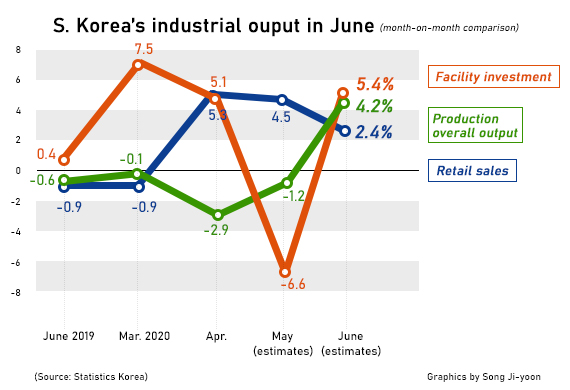 Sales of durable goods rose 4.1 percent, as people rushed to buy cars before the tax break on new car purchases expires this month. Sales of semi-durable goods, like clothes, were up 4.7 percent.

Capital investment gained 5.4 percent in June, rebounding from the 6.6 percent fall in the previous month. Against a year ago, it jumped 13.9 percent.

It remains to be seen, however, whether the pickup can be sustained and pull Asia’s fourth-largest economy out of a technical recession. Korea’s gross domestic product shrank 3.3 percent on quarter in the April-June period, deepening from a 1.3 percent fall in the first three months of the year.