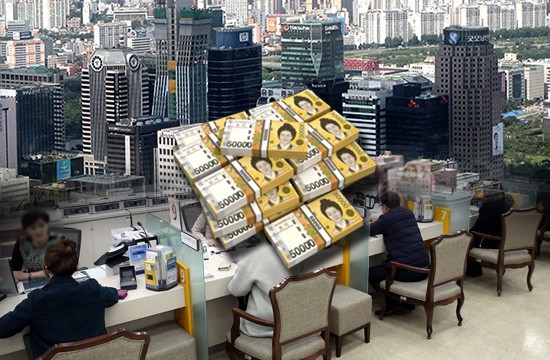 이미지 확대
Bank savings ballooned to record high by June in South Korea, suggesting the unprecedented fiscal and monetary expansion to fight coronavirus went back into banks for saving or debt financing instead of stimulating spending to revive the economy.

According to the Bank of Korea data, total savings at bank accounts stood at 1,858 trillion won ($1.6 trillion) as of the end of June, gaining 109 trillion won from six months earlier. The rise was the fastest for a six-month period and exceeded last year’s annual gain.

A checking account allows the account holders to deposit and withdraw money any time, while savings account is used to park money and earn interests for the long term without withdrawing.

Companies and individuals have capitalized on the easy and ample liquidity condition and hoarded money for emergency. But they have failed to find place to spend, experts said.

“We may have fallen into the ‘liquidity trap’ where increased money supply does not work to stimulate real economy,” suggested Cho Sung-hoon, economics professor at Yonsei University. 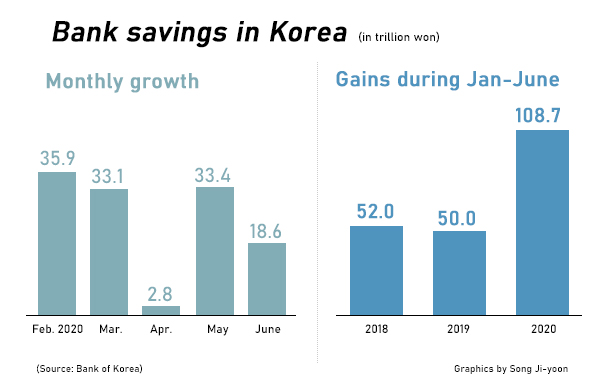 이미지 확대
Liquidity trap is an economic situation in which consumers and companies choose to keep their funds in cash savings instead of spending amid lingering economic uncertainty, making monetary policy ineffective.

To combat the economic disaster caused by the COVID-19 crisis, the Korean government and central bank have launched a series of relief measures. The Bank of Korea has placed the benchmark interest rate at a historic low level of 0.50 percent after cutting it by 75 basis points since March this year to fight the economic fallout from the pandemic.

Also, the government spent 56.4 trillion won by June to prevent financial market turmoil to spread to real economy, as well as to help small business weather the coronavirus impacts.

The current circumstances pose a dilemma for the financial authorities as liquidity expansion would be ineffective at this stage and may only build up inflationary pressure.

Central banks around the globe are faced with the similar challenge.