The South Korean economy sank deeper than expected in the second quarter, declining 3.3 percent from the previous quarter and also nearly 3 percent from a year ago, as the worst pandemic in modern times took a heavy toll on global and domestic demand.

The gross domestic product (GDP) contracted 3.3 percent on quarter in April-June period on the back of 1.3 percent fall in the first three months to put Asia’s fourth largest economy in a technical recession, preliminary data from the Bank of Korea showed Thursday. Against a year ago, it was down 2.9 percent. 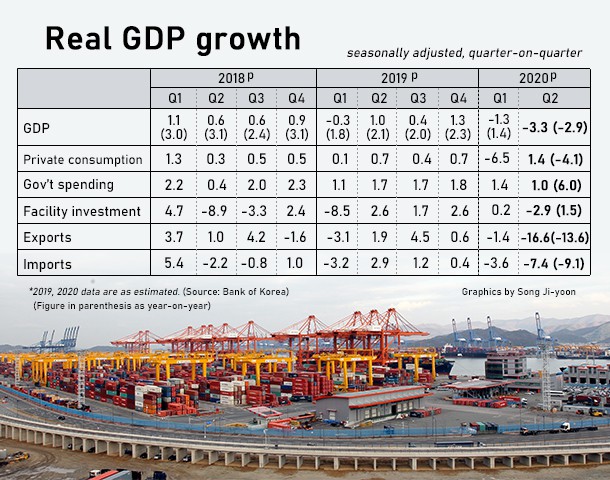 The second-quarter negative was greater than “more than 2 percent” the BOK projected a few months ago when it suggested the economy was headed for the first annual contraction since the wake of the 1997 Asian financial crisis.

“The fall in exports has been sharper than expected. The impact was bigger than the wake of the global financial crisis (of 2008-2009),” the Ministry of Finance and Economy said in a statement.

Lockouts and slack economic activities across the world amidst the pandemic peak dealt heavily on demand. Exports that contribute largely to GDP plunged 16.6 percent on quarter and 13.6 percent on year. The yawning double-digit negative figure was the largest since the 24 percent plunge in the fourth quarter of 1963, BOK said. 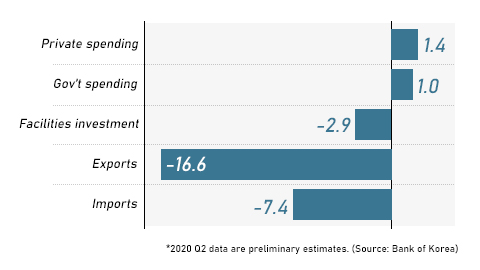 이미지 확대
The Korean economy receded back-to-back only three times in its history – in 2003 from credit card bubble burst, 1998 when the country was international bailout, and 1970 due to global oil shock.

“The down cycle since September 2017 accelerated due to COVID-19 shock,” said Park Yang-soo, director of economic statistics bureau at BOK.

Without a growth of more than 3 percent in the second half, the economy is mostly likely to underperform BOK’s estimate of negative 0.2 percent in annual growth. The BOK will announce revised growth outlook for this year next month. At worst scenario of protracted pandemic impact, the BOK projected the economy could contract as much as 1.8 percent this year.

Gross domestic income fell 2.0 percent, less severe than GDP contraction as the 7.4 percent fall in imports was slower than that of exports in the second quarter, BOK added.

By Hye-seung Seo and Song Min-geun