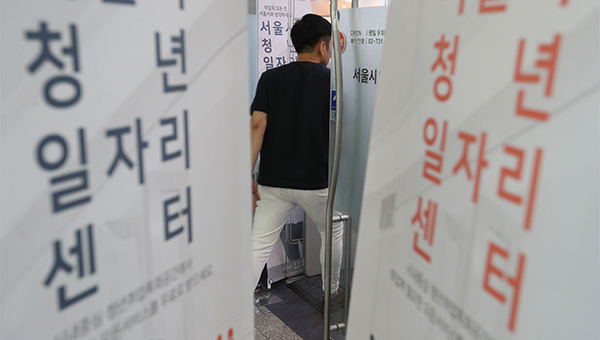 Nearly 4 out of 10 recent college graduates in South Korea are unemployed as virus pandemic has worsened the market for new recruits, data showed Wednesday.

According to data released by Statistics Korea, the number of unemployed among recent graduates aged between 15 and 29 totaled 1.66 million as of May, up 120,000 from a year ago. It is the highest tally since the agency began compiling related data in 2007. Of 4.79 million graduates and dropouts, 35 percent were without jobs, on lookout, or staying at home.

Those unemployed for over three years reached 16.8 percent, down 0.1 percentage point from last year.

Among the unemployed, 38 percent were preparing for vocational training and employment tests, down 0.8 percentage point from a year ago. On the other hand, 23.9 percent were not engaged in any job-seeking activity, reflecting how coronavirus has taken away opportunities of graduates as companies refrain from hiring new workers.

Another 14.4 percent were engaged in leisure activity, 14.2 percent in job-seeking activity, and 9.5 percent in infant care and housework.

Data also showed that 804,000 in preparation for employment tests such as civil service exams and company recruitment tests, up 90,000 from last year, the largest since 2006.

Of employment tests, 28.3 percent were preparing for state government exams, 24.7 percent for companies, 20.6 percent for functional jobs and certificates, 13.9 percent for media and public enterprises, 8.1 percent for specialized jobs, and 4.3 percent for teacher recruitment exams.

Statistics Korea said that COVID-19 has taken a big toll on young graduates seeking jobs, making them to become part of economically inactive population while preparing for employment tests.

Data showed that 3.127 million of recent graduates and dropouts were employed, down 168,000 from the same period last year. By industry, 41 percent were self-employed and in public service sector, 25.2 percent in wholesale and retail, restaurant, and accommodation, 16.1 percent in manufacturing, 4.6 percent in construction, and 1.2 percent in agro fishery sector.