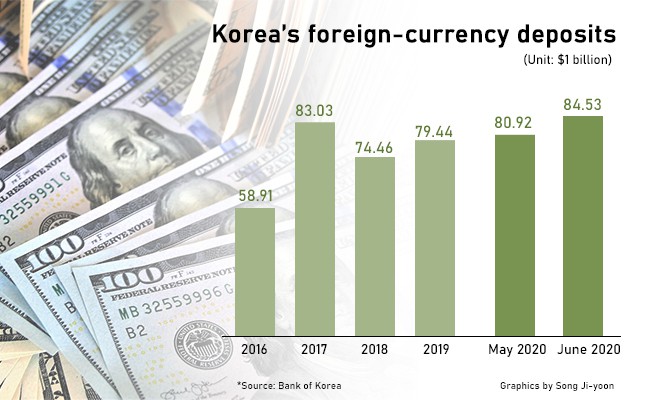 According to data released by the Bank of Korea on Wednesday, the outstanding balance of foreign currency deposits stood at $84.53 billion as of end of June, up $3.61 billion from the previous month. It is the largest amount for the month of June since the central bank began compiling related data in 2012.

Foreign currency deposits refer to those held by Korean individuals and companies, foreigners that have lived in Korea for six months or longer, and foreign companies operating in Korea.

By subject, foreign currency savings held by companies added $2.19 billion to $67.13 billion in June and those by individuals $1.42 billion to $17.4 billion.

By currency, U.S. dollar holdings increased $3.54 billion on month to $73.46 billion in June while yen deposits $530 million to $4.52 billion during the same period. Euro-denominated holdings, however, dropped $530 million to $3.61 billion.