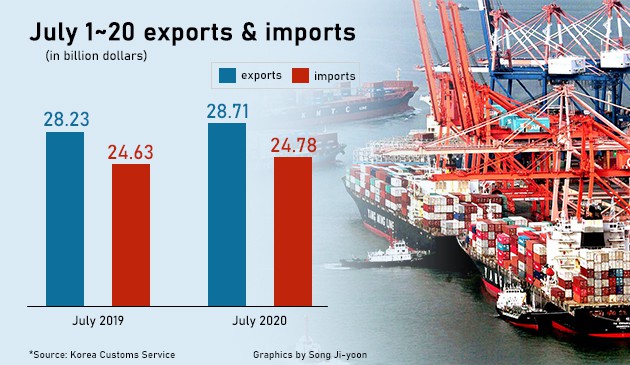 이미지 확대
South Korea’s exports fell nearly 13 percent in the first 20 days of July from a year-ago period, suggesting that the country’s exports may shrink by double digits for the fourth straight month in July amid lingering coronavirus crisis.

According to data from the Korea Customs Service on Tuesday, Korea’s exports reached $24.6 billion in July 1-20, down 12.8 percent from the same period a year ago.

Korea’s exports fell by double digits since April. In June, outbound shipments plunged 10.9 percent, 23.6 percent in May, and 25.5 percent in April.

Average daily exports fell 7.1 percent when reflecting difference in working days. There was one fewer working day against the same month last year.