이미지 확대
Minimum hourly pay in South Korea becomes 80,590 won ($7.43) in 2020, adding 2.9 percent from a year ago after the government chose to stall double-digit wage hikes in light of the ramifications on the weak economy.

Child care allowance of 100,000 won will also be doled out every month for every child aged seven and under, according to the policy changes for 2020 posted by the Finance and Economy Ministry.

Under liberal President Moon Jae-in’s so-called income-led growth campaign, Korea raised the minimum wage by 16.4 percent in 2018 and 10.9 percent in 2019 with the aim to make statutory hourly pay 10,000 won within the first three years of Moon’s term. The campaign was stalled after the sharp wage gains were blamed for hurting employment and placing a heavy burden on small employers who cannot afford the labor cost.

The government said it will continue its subsidies for small businesses to reduce their labor burden but trim the amount given this year’s moderate wage gains. The new minimum wage would apply to all employees including temporary, part-time workers and foreign laborers. 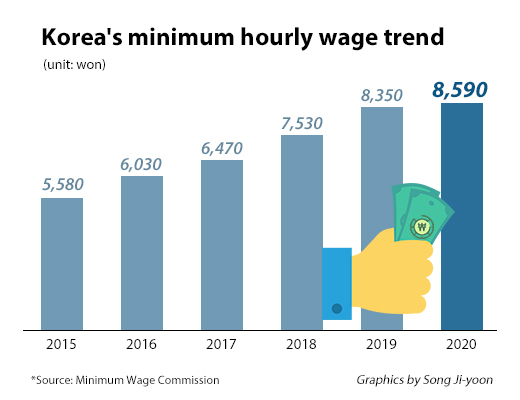 이미지 확대
The new 52-hour workweek, enforced first on large companies from July 2018, becomes effective for midsize companies of 50 to 299 workers from 2020. But these companies can choose to push back the new work hour as they were granted a one-year grace period.

The government plans to extend child benefits to more families to address the country’s alarmingly low birthrate. Currently Korean families with a child under the age of six receive a monthly allowance of 100,000 won per child. From 2020, children under seven would also be eligible, which is expected to increase the benefit target from 2.47 million to 2.63 million kids.

To broaden the social safety net for low-income seniors, Korea would expand the coverage of the maximum 300,000 won monthly pension plans for those aged 65 and older to the bottom 40 percent of income earners from the current 20 percent. This is estimated to bump up the number of recipients from 1.56 million to 3.25 million.

In another measure to address the rapidly aging population, the government is aiming to create 100,000 more jobs for the elderly to provide a total of 740,000 senior positions in 2020. Small companies that continue to employ workers past their retirement age would also be given quarterly allowances of 900,000 won per worker for two years.

The state will expand tuition exemptions for high schools, which started last fall with third graders, to second-year students from 2020. This is expected to help each family save 1.58 million won per child in education expenses, including admission and tuition fees, school operation costs and textbook fees. 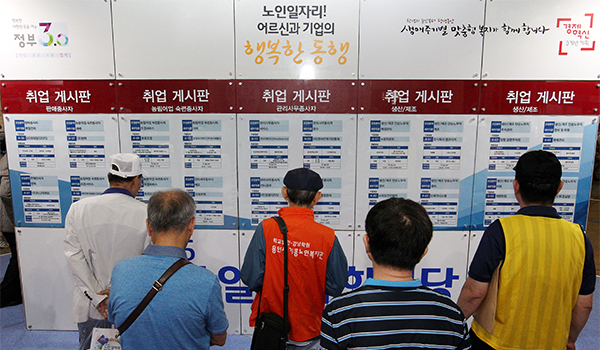