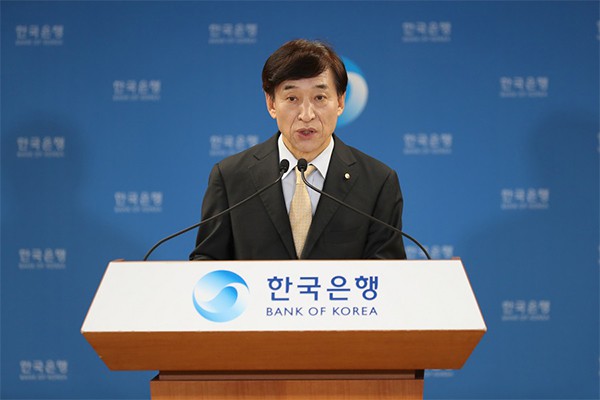 South Korea’s inflation is expected to rise at a slow pace even after the coronavirus pandemic recedes, central bank chief warned Thursday, citing an “unprecedented shock” of COVID-19 to the global economy that should bring fundamental changes to how economic activities are conducted.

Korea’s consumer prices fell 0.3 percent in May versus a year ago, after gaining 0.1 percent in April. A growth in consumer prices remained in the mid-1 percent range in January before slowing down sharply after February, falling short of BOK’s inflation target of 2 percent.

The central bank earlier expected consumer prices to grow 0.3 percent this year from the previous year, slower than a 0.4 percent on-year rise in 2019 that marked the slowest inflation rate ever since the country began compiling such data in 1954.

But even after the COVID-19 pandemic subsides, Lee forecast inflation will recover at a slow pace or remain flat due to the pandemic-driven fundamental changes in overall economic activities by companies and individuals.

Massive production setback caused by the pandemic is expected to lead companies to rush automation for better productivity, which in result would cut labor costs dragging down inflation rate, said Lee.

The economic shock from the pandemic is also expected to change people’s spending habits, he added.

“Based on historical experiences, households and companies tend to reduce debt and increase savings after a massive virus outbreak or an economic crisis due to anxiety about the future,” said Lee. The governor noted that in times of crisis, in particular, there may be more “super-savers” with extreme risk-averse attitude if companies experience massive layoff and sales plunge.

This attitude would help improve overall financial solvency, but also will slow a recovery in spending and investment, which can act as a downward pressure on inflation, said Lee.

But Lee saw no deflation risk now. Thanks to the steep and swift rate cuts by central banks of major economies and other aggressive measures to prevent the real economy from collapsing amid the COVID-19 pandemic, inflation would be pushed higher by ample liquidity that should help consumption recover after the pandemic ends.

The BOK last month forecast the country’s inflation to rise 1.1. percent on year in 2021.

The central will continue to maintain its easing stance to support the economy and inflation, said Lee.