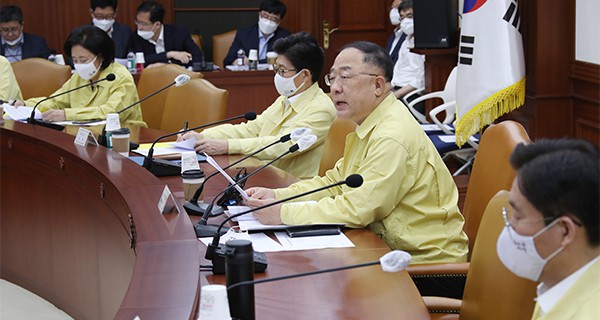 The South Korean government has proposed to impose capital gain tax on a profit of above 20 million won ($16,569) from stock investment starting 2023, while cutting stock trading tax to 0.15 percent from the current 0.25 percent.

Hong Nam-ki, deputy prime minister and finance minister, announced the tax revision scheme on Thursday that is aimed at boosting financial investment and rationalizing capital taxation. The government aims to start to impose the new capital tax code from 2023.

The scheme could change in details after review in public hearings and legislative as the legal revisions require the parliament’s approval. The proposal will be finalized by the end of July after holding a public hearing to collect opinions, Hong said.

Under the proposed plan, investors who hold stocks worth more than 300 million won ($250,041) will be taxed 25 percent of annual capital gains from equity trading, while those with less than 300 million won worth stocks will be subject to a tax rate of 20 percent. Currently, only an investor with stocks worth more than 1 billion won in a single company is considered a major shareholder subject to a capital gains tax from stock investment.

Hong said that under the proposed plan, the tax revision would increase tax for just top 5 percent of stock investors, around 300,000 retail investors, but reduce tax burden for most retail investors of about 5.7 million. Currently about 10,000 are subject to a capital gain taxes on stock investment.

An investor whose annual profits from stock investments fall below 20 million won, however, will be exempted from a capital gains tax, according to the government. Also a retail investor will be allowed to carry over losses of three years.

To impose the new levy, it will create a new taxation category. Apart from general income tax, transfer income tax and retirement income tax, it will impose a tax on net gains of integrated financial investment products including stocks, funds, bonds and derivatives in 2022.

In line with the new capital gains taxes on profits from equity investment, the government will lower stock transaction tax from the current 0.25 percent to 0.15 percent in 2023.