IMF projects deeper contraction of 2.1% for Korean economy in 2020

이미지 확대
The International Monetary Fund (IMF) on Wednesday projected the South Korean economy to contract 2.1 percent this year, revising down from its April outlook to reflect concerns of a deepening global recession from the ongoing pandemic threat.

In April, it had forecast Korea`s gross domestic product to shrink 1.2 percent. Growth for 2021 was projected at 3.0 percent.

The IMF also slashed its global growth forecast for 2020. It now expects a decline of 4.9 percent, lower than the 3.0 percent fall it predicted in April.

“The COVID-19 pandemic has had a more negative impact on activity in the first half of 2020 than anticipated, and the recovery is projected to be more gradual than previously forecast,” the IMF said in its World Economic Outlook update.

“We are definitely not out of the woods,” said Gita Gopinath, director of the IMF’s research department. “This is a crisis like no other and will have a recovery like no other.” 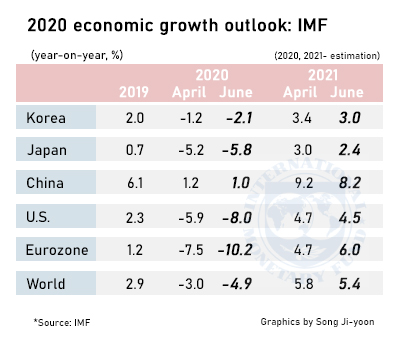 이미지 확대
The IMF gave a grimmer outlook for developed economies, projecting a contraction of 8.0 percent compared with a 6.1 percent fall in April.

The U.S. economy was expected to shrink 8.0 percent, a sharper decline than the 5.9 percent predicted previously.

The IMF projected Japan to contract 5.8 percent this year compared with a 5.2 percent fall in April.

Emerging economies were expected to retreat 3.0 percent this year. Previous April forecasts were a 1.0 percent decline.

The IMF saw the Chinese economy expanding 1.0 percent in 2020, down from its previous estimate of 1.9 percent growth. India was expected to shrink 4.5 percent and Southeast Asia 2.0 percent.

While a virus-led global downturn would take a hit on Korea’s export-reliant economy, it is expected to fare better than its developed peers that are grappling with higher infection rates.

Korea’s aggressive stimulus policies are also likely to help fend off a full-blown recession. The country is set to pass its third extra budget plan worth 35.3 trillion won ($29 billion) to rescue key industries suffering from the coronavirus blow. This would bring the total of the three packages to 270 trillion won.