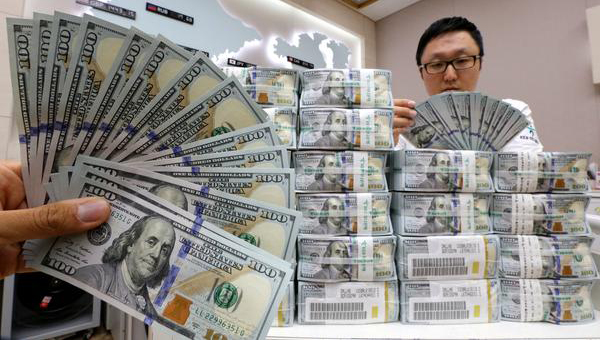 이미지 확대
South Korea’s short-term external debt ratio hit seven-year high in the first quarter, although remained at passable levels when compared to past crisis periods, according to authorities.

According to data released by the Bank of Korea on Thursday, the country’s short-term external debt to reserve assets stood at 37.1 percent as of end of March, up 4.2 percentage points from three months ago. It is the highest tally since 37.3 percent in March, 2013.

Korea’s short-term external debt accounted for 30.6 percent of total external debt in the first quarter, up 1.8 percentage points from the previous quarter ended December. The share is the highest since the fourth quarter of 2012.

The government said the ratio of Korea’s short-term external debt and share in total external debt increased slightly but nevertheless was not a worrisome level.

According to the ministry, short-term external debt ratio was 78.4 percent at the end of September, 2008, just before the outbreak of global financial crisis. The share in total external assets was 51.7 percent. 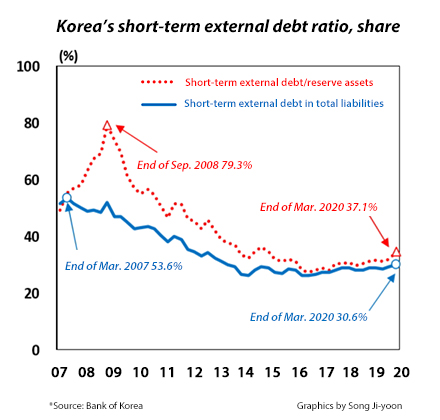 Korea’s international investment position – which is foreign assets minus liabilities – reached its highest level at $565.4 billion as of end of March, up $64.5 billion from the previous quarter.

External debt – which excludes securities and financial derivatives in liabilities – stood at $485.8 billion, up $18.8 billion during the same period. Short-term assets increased $14 billion to $148.5 billion while long-term assets $4.8 billion to $337.3 billion.

The ministry said that Korea’s external debt increased in the first quarter as banks increased loans to secure foreign liquidity in March to respond to uncertainty in the international financial market amid coronavirus spread. It added that external debt will recover to normal level when coronavirus conditions improve.