According to Bank of Korea on Thursday, Korea’s producer price index (PPI) fell 0.7 percent to 102.08 in April from a month ago, the third month in the negative against the previous month. The PPI was down 1.5 percent against a year-ago period, marking an on-year decline for two consecutive months.

PPI refers to the wholesale cost of goods and services and influences later inflation.

Dubai crude prices, the country’s benchmark that makes up nearly 85 percent of total oil imports, averaged $20.39 per barrel in April, down from $33.71 a month earlier. 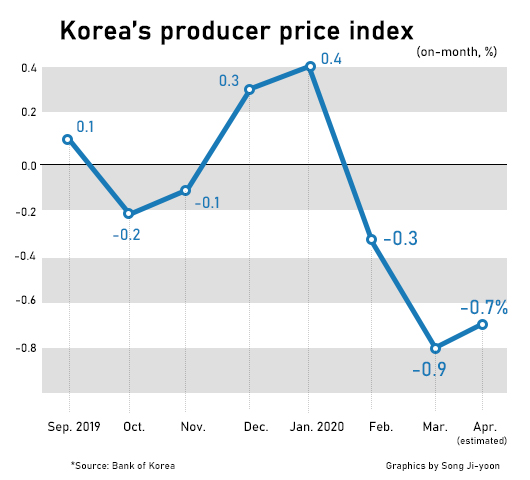 이미지 확대
As a result, coal and petroleum products prices lost 22.6 percent on month and 43.5 percent on year in April, marking the biggest falls against the previous month and year since data compiling from January 1965.

Service prices remained unchanged from the previous month, led by a rise in financial/insurance and transportation costs. Prices of air freight surged 12.2 percent.

The total output price index, which includes exports, shriveled 1.0 percent on month and 2.3 percent on year.