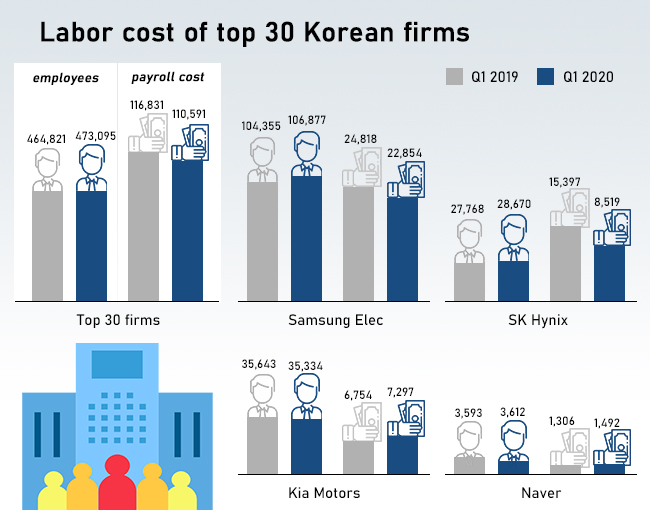 이미지 확대
Large companies in South Korea have not cut back payroll in the first quarter despite woes from virus pandemic, but it remains unclear how long they can survive without streamlining if epidemic fallout continues.

Maeil Business Newspaper found from study on first-quarter reports, the country’s top 30 companies had 473,095 on their payroll as of the end of March, up 1.78 percent from a year ago period.

Out of top 30 companies by market capitalization in Korea, 20 increased workforce against a year-ago period.

Oil refiners including SK Innovation and S-Oil recruited more despite their worst-ever performance caused by a plunge in global oil prices and demand.

The companies instead cut payroll costs by 5.34 percent in the January to March period from a year earlier. There were 11 firms that paid less to their workers out of the 30 firms, partly due to the reduced bonus payment amid weak earnings. The rest of 19 companies spent more for wages despite business slump by resorting to cash reserves. Cash and cashable assets of the top 30 firms amounted to 26.77 trillion won ($21.7 billion) in the first quarter, down 6.39 percent from the same period a year ago.

But market experts doubt how long the companies would be able to keep the workers. Seoul-based market tracker FnGuide estimated that a combined operating profit of Korean firms listed on the main Kospi market would tumble 19.07 percent in the second quarter from a year-ago period due to the shock from the COVID-19.

“Beneficiaries and victims of COVID-19 would come into a clear view amid the lengthening of the outbreak,” said Kim Chan-hee, an analyst from Shinhan Financial Investment. “The domestic economy is expected to make a slow recovery thanks to the government’s supplementary budget and easing of social distancing.”