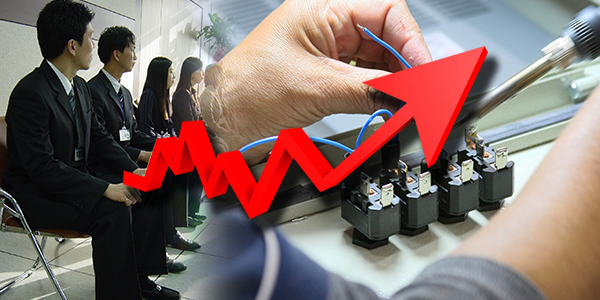 이미지 확대
South Korea added 516,000 jobs in December, the fastest growth in more than five years, and finished 2019 at its best-ever employment rate. But the feat could be discredited as details show that manufacturers and self-employed with paid hires shed jobs by a record number last year.

The employment rate of Koreans aged 15 to 64 – the standard of the Organization for Economic Cooperation and Development – was 67.1 percent in December, up 0.6 percentage point from a year earlier. For the full year, it was 66.8 percent, a record high.

The December unemployment rate was the same as last year’s at 3.4 percent. For all of 2019, it was 3.8 percent, unchanged from the previous year.

Key figures raised questions about the sustainability in the job data.

The manufacturing sector, responsible for a majority of the decent paying jobs, cut payroll by 81,000 last year, the biggest loss since data compiling was revised in 2013. The number of self-employed with hires fell by 114,000, the largest since 1998, while self-employed with no paid hires gained 81,000 to underscore the hardship of self-employed businesses due to the spike in labor cost.