South Korea shed 476,000 jobs in April compared with a year earlier, its steepest monthly loss in more than two decades, as the coronavirus fallout extended into the second quarter.

The number of employed totaled 26.56 million, down 476,000 from the same month a year ago, Statistics Korea data showed Wednesday.

This was sharpest monthly decline since February 1999 when the economy lost 658,000 jobs in the aftermath of the Asian financial crisis.

The jobless rate in April was down 0.2 percentage point at 4.2 percent as more people gave up searching for a job.

The economically active population totaled 27.73 million in April, down 550,000 on year. As a result, the economically inactive population – those neither working nor actively seeking employment – surged 831,000 to 16.99 million. Both figure changes were a record high since the agency started compiling the data with renewed standards in June 2000. 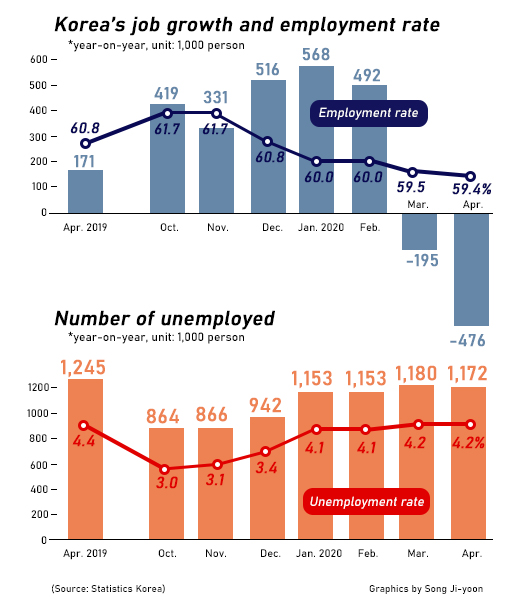 COVID-19 dampened overall consumer demand as many avoided going outdoors to contain the spread of infection.

Job losses were the most severe in the services sector, especially accommodations, restaurants and education, as businesses were hit by a sharp plunge in customers due to stay-at-home orders and absence of tourists.