Job seekers are waiting for their turn to apply for unemployment benefits. [Photo by Han Joo-hyung]

South Korea doled out record unemployment benefits last year as the jobless numbers in the 40s skidded for four years in a row amid a slump in the manufacturing and self-employed segments.

State unemployment benefits reached 8.09 trillion won ($7.02 billion) in 2019, up 25.4 percent from the previous year, the Ministry of Employment and Labor said Monday. Initial claims for jobless benefits rose 129,000 to 1.44 million during the same period.

This was largely due to the sluggish job market. The monthly number of Koreans on unemployment rolls topped 1 million for 16 months during the 22-month period from January 2018 to October 2019. Unemployment was the highest among the 30s and 40s, with manufacturing jobs hit the hardest.

Another reason behind the surge in jobless benefits was the state’s extended coverage of employment insurance under President Moon Jae-in. Unemployment benefits were also upped as part of the government’s broad initiative to bolster social welfare programs, the ministry explained. 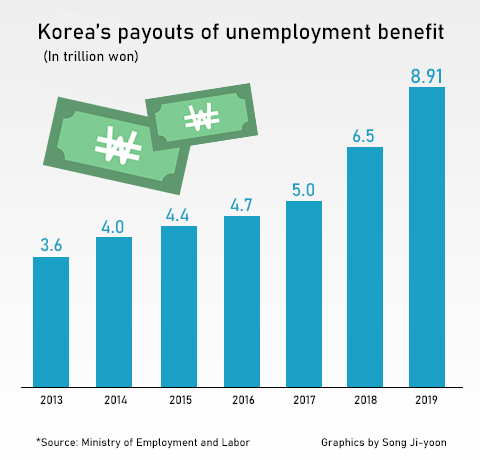 이미지 확대
Applications for employment insurance gained 3.9 percent on year to 13.7 million in 2019, the largest annual rise in 12 years. In January-November 2019, the application rate was 71.9 percent for full-time and temporary workers.

The 30s were the only age group to see their applications slide, by 18,000. Specifically, they witnessed a 30,200 decline in manufacturing and 9,200 fall in construction.

Businesses with less than 300 workers saw their applications rise by 218,000. For larger businesses, the number climbed by 210,000.