이미지 확대
Job scarcity for South Koreans fresh out of college has become structural, with the jobless rate in the age group staying highest among the countries of the Organization for Economic Cooperation and Development (OECD) for the seventh year.

According to data from the OECD on Monday, the jobless in the age of between 25 and 29 made up 21.6 percent of the country’s entire unemployed population in 2018, staying at the highest among 36 OECD member states for seven consecutive years.

Although those in the age group account for just 7.8 percent of the country’s population aged 15 years and older, the fact that one out of five is without a job points them the weakest in the job market.

In 2011, Greece and Slovenia showed the biggest unemployment rate of 20.8 percent for the age group, trailed by Korea with 20.1 percent. The ratio was reversed a year after, with the two European countries recorded sub-20 percent each, while Korea still was above 20 percent.

Experts attributed bigger wage gap in big and small firms in Korea compared with other countries to the high jobless rate in those fresh out of universities. 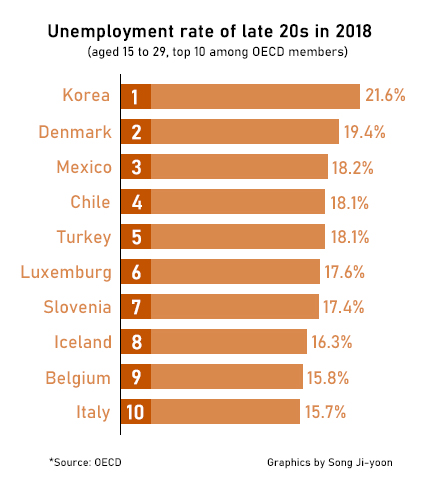 이미지 확대
According to a wage data released by Statistics Korea last month, small workplaces paid 2.23 million won for a monthly salary on average. This is only 45.7 percent of average 4.88 million won that large companies paid for their employees in 2017.

The average salary for entry-level jobs at large companies in Korea is much higher than those in other major developed economies, too. Entry-level workers at large corporate names earned $36,228 on average per year in 2018, higher than $27,647 in Japan where companies are having trouble in finding workers.

The salary gap makes the youth try repeatedly to land jobs at bigger workplaces rather than settling in smaller ones, while labor rigidity has been reducing new hiring in large companies.

“Due to the widening salary gap between firms, more jobseekers are willing to spend longer in looking for jobs at bigger firms or preparing civil service exams,” said Jo Yeong-moo, analyst at LG Economic Research Institute.

Such structural problems will prevent easing in the problem despite the thinning youth population, experts observe.

The more the ratio of 20s, the lower the youth jobless rate, a report by the Economic Research Institute under Bank of Korea showed, saying an economy with the falling number of the youth could face worse outcomes.

“The only way to solve the problem is for companies to restore and make more jobs at home,” said Ju Won, analyst at Hyundai Research Institute.