이미지 확대
South Korean exports ended 2019 at their weakest performance in a decade, while the December fall in single digits offered a silver lining that the worst may be over.

Exports by Asia’s fourth-largest economy were down 5.2 percent on year at $45.7 billion in December, extending the losing streak for the 13th straight month, but improving from a 14.3 percent fall in November, according to the Ministry of Trade, Industry and Energy on Wednesday.

The downturn in exports had accelerated from June by tumbling in double digits.

For full 2019, exports sank 10.3 percent on year to $524.4 billion, the first negative in three years and the first double-digit contraction since 2009 in the wake of the global financial crisis when exports plummeted 13.9 percent.

The government estimates this year’s exports to grow 3.0 percent on a gradual rebound in semiconductor prices and a thaw in the U.S.-China trade war, but experts deem the gain insignificant against a negative figure in 2019.

The chip front has yet to show a clear sign of an uptick anytime soon with exports plunging 17.7 percent in December on year, though the fall was the mildest in eight months.

Prices of DRAM memory chips, the country’s main export items, have stopped their freefall and held their ground for two months in a row. The fixed cost of DRAM in December has been held steady at $2.81 since October while spot prices have started to pick up in mid-November, according to market research firm DRAMeXchange.

This has led many analysts to project a pickup from the second quarter of this year, helped by increased demand from 5G smartphones and data servers. But the timing is still uncertain, with some saying the recovery would have to wait until the latter half. 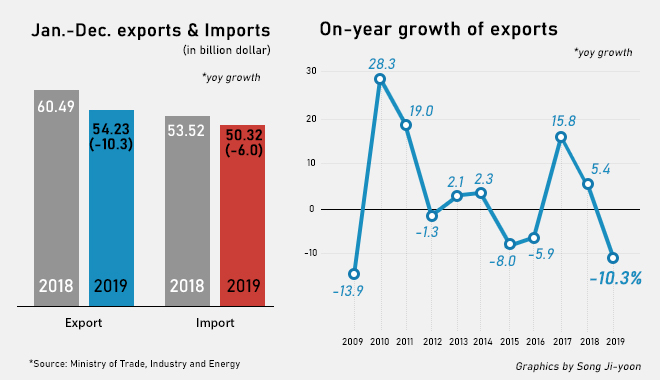 이미지 확대
The outlook is also murky for other mainstay sectors including automobiles and petrochemicals.

Korea’s auto output missed the annual 4 million unit mark last year for the first time since the crisis-hit year of 2009 due to weak demand from the global economic slowdown and trade uncertainties. There is still lingering concern over President Donald Trump’s threats to impose tariffs on imported cars to secure more auto jobs in the U.S.

Yet local automakers are pinning high hopes on markets like China and India and anticipating a sales boost from new releases and state subsidies to help replace old vehicles.

The country’s petrochemical industry is also expected to stay subdued amid the global oversupply, slowing Chinese economy and sluggish domestic demand. The refining margin, a key measure of the oil industry’s profitability, slipped to -$0.2 in December, the first negative reading in 18 years. Experts say massive ramp-ups in China and Southeast Asia have led to oversupply while the ongoing trade war with the U.S. has soured Chinese appetite for petrochemicals, resulting in a full-blown industry slump.

One bright spot is the increased shipments for low-sulfur fuel oil following the International Maritime Organization’s new regulations on sulfur content in marine fuel. The rules, effective from 2020, limit the sulfur cap of marine fuel to 0.5 percent from the previous 3.5 percent.