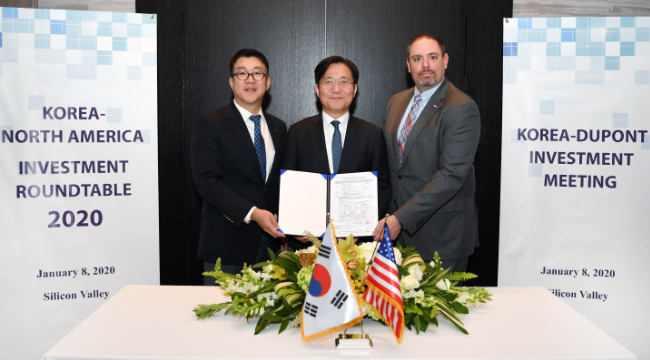 DuPont has decided to invest $28 million in South Korea to build production facilities for extreme ultraviolet (EUV) photoresists used in manufacturing semiconductor chips, a move that is expected to help reduce Korea’s hefty dependence of the key industrial material on Japan.

According to the Ministry of Trade, Industry and Energy on Thursday, Minister Sung Yun-mo held a separate meeting with DuPont Electronics & Imaging President Jon Kemp, while visiting Silicon Valley for a roundtable meeting with potential investors who have interest in Korea’s material, component and equipment industry on Wednesday (local time).

During the meeting, the U.S. chemical giant submitted an investment notification form to Korea Trade-Investment Promotion Agency (KOTRA) after finalizing its plan to invest $28 million in Korea to develop and produce EUV photoresists.

DuPont determined the investment plan to meet market demands for next-generation products in semiconductor miniaturization and to preemptively respond to the growing market of EUV photoresists.

이미지 확대
As part of the efforts to respond to Japan’s export controls, the Korean trade ministry directly contacted DuPont to discuss the investment plan, and in the course of the discussion, the central and local governments and KOTRA led the discussion as one team, resulting in making Korea as the destination for DuPont’s investment over a rival country, the ministry said.

The investment decision is also expected to contribute to strengthening collaboration with local companies and boosting the competitiveness of related industries.

During the first five months of last year, Korea relied on imports from Japan for over 90 percent of EUV photoresists key to chip miniaturization.

During the meeting, Kemp said DuPont will closely work together with Korean customers in substantive testing and other areas to develop and produce EUV photoresists.

Although Japan has recently eased restrictions on its EUV photoresist exports, the Korean government will continue to work with the domestic industry to help localize core materials, components and equipment and diversify source countries, Minister Sung said.