Under the guideline for 2021 budget, the finance ministry argued fiscal role must stay “active” as the economic fundamentals have been hard hit by the virus impact.

“The foundation of the country’s economy has taken a hit from the COVID-19, and self-employed and small businesses desperately need support more than ever,” said Ahn Il-hwan, head of budget planning office at the finance ministry. “The fiscal spending’s active role is inevitable to revitalize the economy,” Ahn added.

Based on the 2021 budget guideline approved by the Cabinet on Tuesday, ministries and government agencies will write and submit their budget requests and spending plans to the finance ministry by May 29. Then, the ministry will prepare a budget for next year and submit it to the National Assembly by Sep. 3. 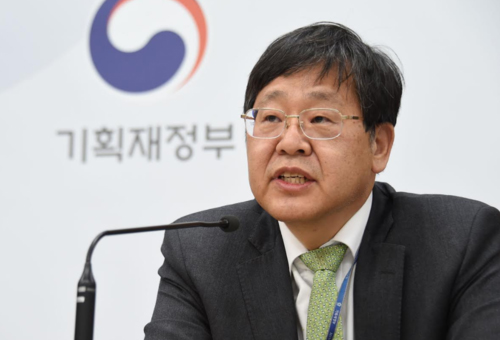 Ahn Il-hwan speaks in a press briefing in Sejong on Mar. 20, 2020. [Photo provided by The Ministry of Economy and Finance]

The expansionary fiscal policy for next year would result an increase in overall government expenditure, which already jumped 9.1 percent this year and 9.5 percent last year. If next year’s spending goes up by 9 percent again, the overall expenditure would exceed 550 trillion won ($438 billion). The government this month has packaged 11.7 trillion in supplementary budget and also may raise more to fight the virus fallout.

The government plans to focus next year’s expenditure on boosting domestic consumption and exports to revitalize economy, severely weakened by the coronavirus outbreak.

To back up its active spending, the government plans to overhaul expenditures, including mandatory 10 percent cut in discretionary spending at all government offices.