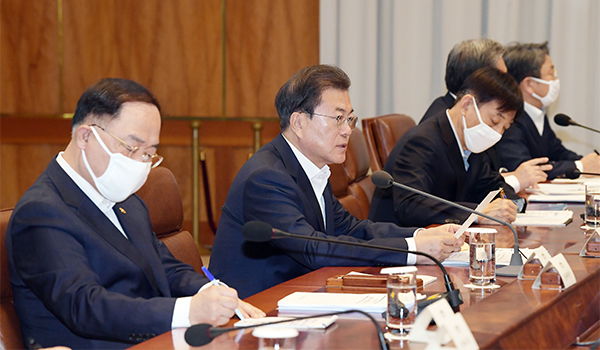 South Korea will double the size of its coronvirus relief package to 100 trillion won ($79.6 billion) to aid Korean companies, both big and small, and shore up financial markets.

In the second emergency economic council on Tuesday, President Moon Jae-in said financial aid for the business sector should be scaled up due to the escalating coronavirus crisis worldwide.

The administration, in its first emergency meeting last week, had announced a 50-trillion-won package for small businesses and self-employed workers hit hard by the outbreak.

This time, the government included a 20-trillion-won fund to stabilize bond markets and ensure sufficient credit flows to companies. This is twice the amount of funds devoted to the same purpose during the 2008 financial crisis.

One noticeable difference from the previous announcement was the inclusion of big companies. “If necessary, we would take actions to prevent large corporations under severe financial distress from collapsing,” Moon said.

The fall of a single conglomerate in Korea could have devastating ripple effects as its supply chains are intricately tied to a number of small companies.

Another 10.7 trillion won will go to the stock market, accompanied by tax incentives for stock investors. The stock and bond fund will be activated from next month.

“The aid will be extended beyond small businesses to include major industry players, providing a wider safety net that covers both big and at-risk companies,” Moon said. “This extraordinary action is a preemptive move to protect all of our businesses.”

The latest rescue plan is also seen as an effort to protect the job security of workers in hard-hit sectors, such as aviation, travel and hotels.

“Companies in distress could lead to a sharp rise in unemployment,” Moon said. He urged officials to consider significantly upping government support for companies that keep workers on their payroll.

Moon said direct payments to individuals are being considered if the economic fallout from the coronavirus persists.