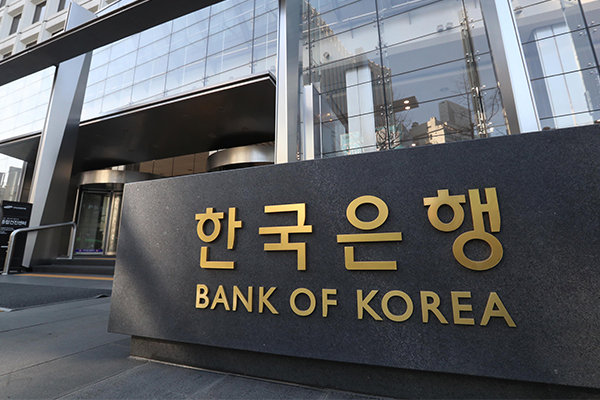 The Bank of Korea (BOK) joined the bond purchasing program of global central banks by expanding the target of its repurchase-agreement operations, or repos, beyond government securities to quasi-state corporate bonds.

From Tuesday, BOK will expand repo dealers beyond banks to include primary dealers and brokerages dealing in monetary stabilization bonds, according to a senior BOK official on Monday.

The bank will also add several bonds of public enterprises in its repo operations, on top of sovereign bonds, government-backed debt, mortgage-backed securities and bank bonds.

The quasi-public debts include papers from Korea Electric Power Corp. and Korea Land and Housing Corp. The complete list is to be announced by the Financial Services Commission (FSC).

The amount of the repo operations has not been disclosed.

Unlike the U.S. Federal Reserve, the BOK said it cannot purchase commercial papers or corporate bonds. In its most aggressive intervention to date, the Fed on Monday announced it would embark on an open-ended asset purchase program and start purchasing corporate debt to keep markets running smoothly.

The Korean central bank is not an issuer of a key reserve currency, like its U.S. counterpart, and given Korea’s open foreign exchange market, such a move could drive more volatility in the Korean won, the BOK claims.

Taking on such high-risk debt would also be overstepping the BOK’s mandate, which limits the bank’s asset purchases to government bonds and government-backed debt.

“Never in the BOK’s history has it directly purchased corporate bonds and commercial paper. Even if does engage in such an operation, it would be hard to select which companies to support,” said a former FSC official. “There are concerns that this could create a moral hazard and leave a bad precedent.”

But some say desperate times call for desperate measures.

“In this liquidity crisis, even normal companies can go under,” said Ha Joon-kyung, economics professor at Hanyang University in Seoul. “As this problem is beyond the ability of banks, the BOK needs to directly buy corporate bonds and commercial papers to free up liquidity.”