이미지 확대
South Korea and the United States agreed to run a currency swap credit of up to $60 billion through September to jointly address disruptions in their markets from the shortage of the U.S. dollar amid the coronavirus pandemic.

According to the surprise joint statement from the central banks of the two countries late Thursday, the swap agreement would be doubled from the first $30 billion deal signed in October 2008 amid the Wall Street meltdown. The six-month swap then had been extended twice and lasted until February 2010.

The dollars secured from the U.S. central bank will be immediately supplied to the market, said Bank of Korea Governor Lee Ju-yeol on Friday. 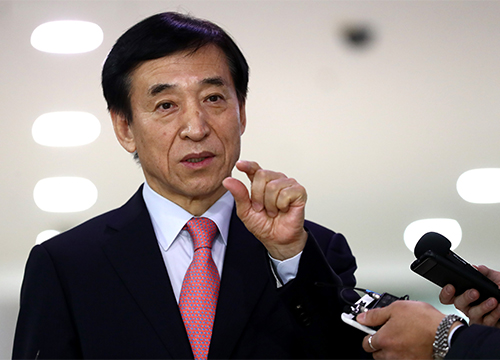 BOK Governor Lee Ju-yeol speaks to reporters at the central bank in Seoul on Mar. 20, 2020. [Photo by Lee Chung-woo]

The news bolstered the Korean currency. The won on Friday rose 2.73 percent, or 35.00, against the U.S. dollar after ending the previous day at its weakest since July 2009.

Korea currently has the world’s ninth-largest foreign exchange reserves at $409.1 billion. But the coronavirus outbreak has prompted a massive capital outflow in Korea and other global markets as investors yanked their money out in favor of more secure assets like the dollar. 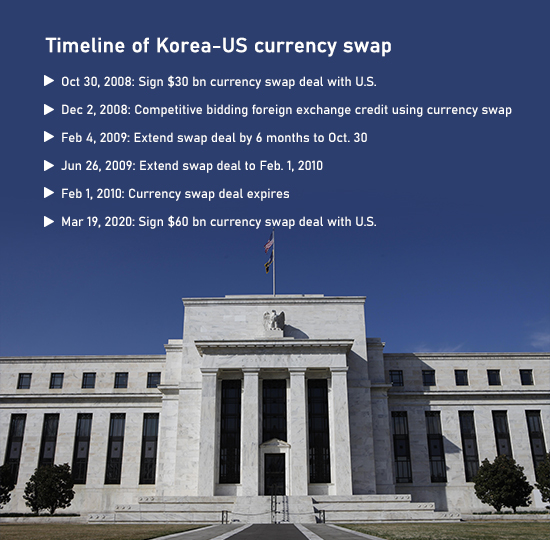 이미지 확대
On Thursday, the benchmark Kospi plunged 8.39 percent to a near 11-year low, falling by the most since the 9.44 percent drop in October 2008. Kospi’s market cap also fell below 1,000 trillion won for the first time in nine years.