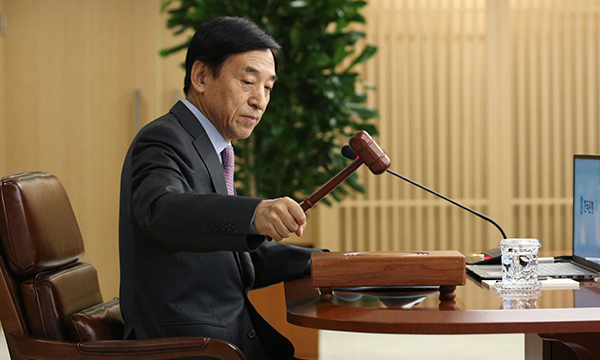 South Korea’s central bank chief said there was still maneuvering room for the base rate to be brought down below the record-low 0.75 percent and indicted additional easing actions could be taken depending on domestic market conditions and policy trends in major countries.

“It is true we cannot cut interest rates to zero like the U.S. has done,” Bank of Korea (BOK) Governor Lee Ju-yeol said in a teleconference with reporters after convening an emergency policy meeting Monday evening. The bank cut the benchmark rate by half a percentage point to a historic low of 0.75 percent.

But when asked whether the policy rate could be lower, he said the effective bottom rate is “not fixed” and that “it could change depending on local market financial conditions and rate policies of major countries.”

Apart from the conventional monetary action through rate cuts, the central bank also could take unconventional actions if the coronavirus crisis drags out longer than expected and causes more disruptions in the market and economic activities, he said.

“We have all possible options on the table,” he said. 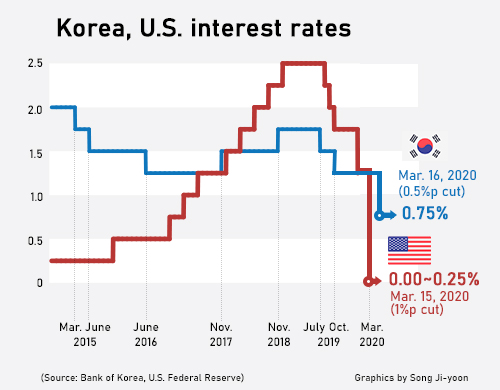 이미지 확대
The BOK’s action came a day after an emergency move from the U.S. Federal Reserve, which cut its target policy range by a full percentage point to 0 to 0.25 percent and announced plans to buy $700 billion in government bonds and securities to bolster liquidity.

Lee admitted Korea’s economic growth this year would be well below the anticipated 2.1 percent.

“While it’s impossible to predict the trajectory of the COVID-19, it now presents a major risk to growth,” he said.