Govt to focus on SOC investment in H1 to revive economy 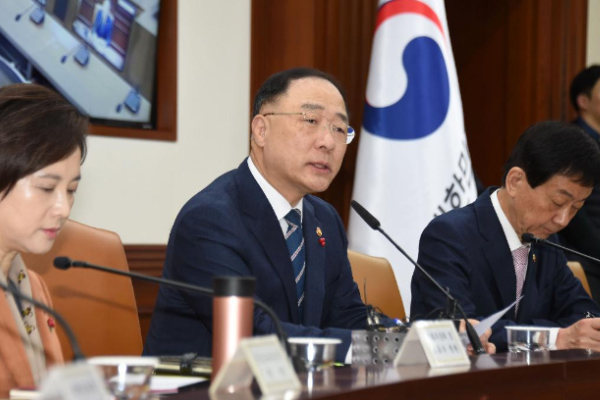 S. Korea’s Finance Minister Hong Nam-ki speaks at a meeting to vitalize the economy in Seoul on Jan. 8, 2020. [Photo provided by the Ministry of Economy and Finance]

The Korean government confirmed a plan to advance about 60 percent of this year’s super budget in the first half, with a focus on massive spending in social overhead capital projects to revive growth momentum in Asia`s fourth-largest economy amid heightened risk from the external front.

The government on Wednesday decided to execute 62 percent of the 2020 record-sized budget of 512.3 trillion won ($438.2 billion) in the first half during a meeting of economic ministries led by Deputy Prime Minister and Finance Minister Hong Nam-ki.

At the meeting, Hong said state-run institutions will spend 60 trillion won, which is 6.5 trillion won more than last year’s 53.5 trillion won, to create jobs and provide growth momentum this year. Hong stressed those investments will be concentrated on SOC projects such as creation of new towns in Sejong and Wirye and energy sectors including the construction of power plants.

The government will also shorten the period of preliminary feasibility studies for such projects from 10 months to up to seven months to speed up budget execution. 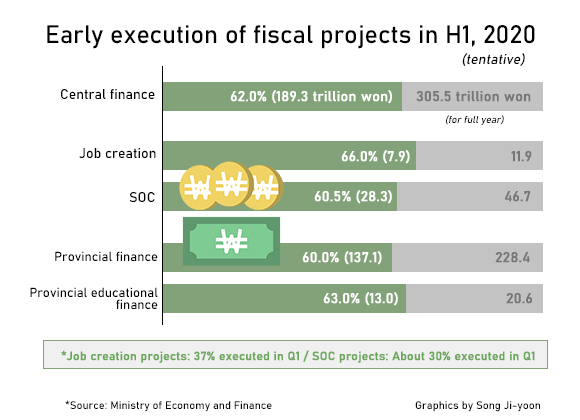 이미지 확대
Preliminary feasibility studies were introduced to minimize the waste of state resources by assessing the potential benefits of a state-led project that is expected to cost 100 billion won or more.

The massive spending on SOC projects contradicts the position of the progressive Moon Jae-in administration, which has prioritized welfare expenses over fiscal spending on SOC, but the prolonged slowdown in the domestic economy and lingering uncertainties from the external front are believed to have led the government to opt for SOC investments to prop up the economy.

The export-reliant Korean economy has been hit hard by protracted trade disputes between the world’s two biggest economies the United States and China, which are also Korea’s two biggest trading partners. Risk from external factors has heightened from recently escalated tensions between the U.S. and Iran with tit-for-tat assaults following the U.S. recent killing of Iranian commander Qasem Soleimani. Iran on Wednesday (local time) retaliated against the U.S. with missile attack on two Iraqi bases housing U.S. and coalition troops.

By Lee Ji-yong and Minu Kim