이미지 확대
The new coronavirus outbreak is expected to take a bigger toll on the South Korean economy than any major infectious diseases that had emerged in recent years, a central bank report said on Wednesday, calling for more micro approaches to bolster the real economy.

The Bank of Korea report said that during the outbreaks of MERS in 2013, the swine flu in 2009, and SARS in 2003, it took less than 13 trading days for the country’s stock prices and long-term bond yields to return to their previous levels seen before the shocks. But the country’s financial markets in March are still in turmoil without any sign of immediate recovery after the market routs began with the first confirmed case of COVID-19 in mid-January, it noted.

Foreign investors were the biggest sellers dumping Korean stocks worth 5.4 trillion won ($4.47 billion) from Jan. 21 to the end of February. In the first nine days of March, their net selling of stocks amounted to 3.3 trillion won. In contrast, their investment into less risky bonds increased by 3.7 trillion won, the report pointed out.

The report also said the COVID-19 outbreak, which was declared as a pandemic by the World Health Organization (WHO) on Wednesday, would affect the overall economy spanning everything from consumption to export to manufacturing supply chain. In particular, airlines, hotels and tourism services could be hit hardest if the coronavirus outbreak drags on, the report warned. 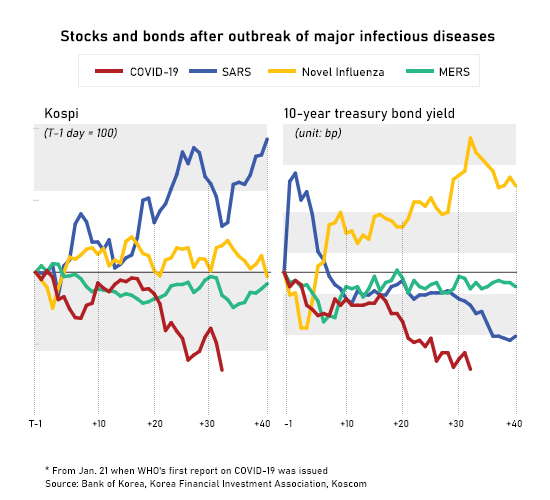 이미지 확대
To mitigate the economic shocks, the government should seek measures that could help encourage the private sector to contribute more to the real economy such as business investment and domestic consumption, said a Bank of Korea official. Considering that China`s influence on Korea and the global economy has massively increased compared with during previous viral outbreaks, the global spread of COVID-19 should cause a greater fallout.

The report pointed out the country’s market liquidity recently grows slowly and the lending to the private sector’s contribution to the real economy is weakening despite its recent increases.

The BOK’s analysis using vector autoregression (VAR), a stochastic process model, showed that the investment effect of corporate credit is not distinct after the financial crisis with a low statistical significance. The same is true of household credit, the report said.

The report blamed the concentration of corporate lending around real estate with a low production inducement for the low investment effect. Another bad factor is a sharp increase in loans for operating expenses compared to those for capex amid economic uncertainty. In the third quarter ended September last year, capex loans stood at 30 trillion won, down from 43 trillion won in the fourth quarter of 2017, whereas operating capital loans jumped to 46 trillion won from 23 trillion won in the same period.

In the case of household credit, housing-related loans made up the bulk. Household borrowings from banks grew by a record 9.3 trillion won in February, of which 7.8 trillion won was driven by mortgage loans.