According to the Bank of Korea’s preliminary international balance of payments data Tuesday, Korea’s current account surplus totaled $5.97 billion in November, down from $7.83 billion a month earlier and adding from $5.13 billion a year ago.

Goods account surplus narrowed to $7.39 billion in November from $7.5 billion a year earlier as the country’s exports tumbled 14.4 percent to $44.05 billion, extending its losing streak to 12th months amid lingering uncertainties on the external front. Imports also fell for the seventh straight month, down 13 percent on year to $40.72 billion, due to subdued domestic demand. 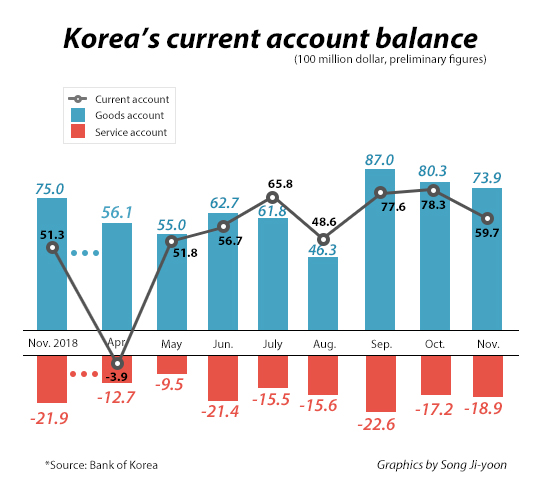 이미지 확대
Service deficit was pared to $1.89 billion in November from $2.19 billion a year ago. Travel account deficit improved to $950 million thanks to the increases in travelers from China and Southeast Asian countries.