이미지 확대
South Korea’s job growth in January accelerated to the fastest pace in more than five years, primarily led by state-sponsored temporary jobs for the elderly that pushed their job gains to record highs.

Employers added 568,000 new jobs in January from a year earlier, picking up pace from the 516,000 gains recorded a month ago, Statistics Korea reported Wednesday.

January job growth was the strongest since August 2014 when the economy added 670,000 jobs.

“The public job scheme has been budgeted to make 740,000 jobs this year, of which more than 100,000 would have been hired in January,” said Eun Soon-hyun, a Statistics Korea official. Job gains in January 2018 also had been particularly low at 19,000.

Senior employment was the primary driver of overall growth, with 507,000 new jobs added among those aged 60 and older, an all-time high. As many as 327,000 jobs came from those aged more than 65, also the highest since such data was first compiled in 1989. 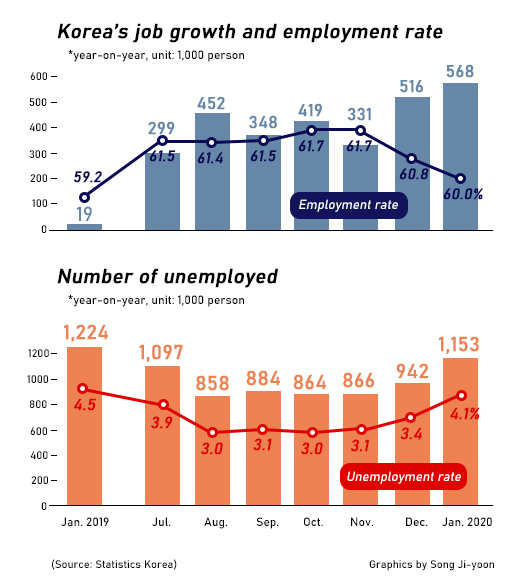 Retail and wholesale employers shed the most jobs at 94,000. Manufacturing, responsible for 16.6 percent of all hiring, added a mere 8,000 jobs. The information telecommunications sector cut payroll by 35,000 and finance and insurance sectors by 32,000.

The number of full-time hires gained 664,000, while day laborers and temporary workers fell 62,000 and 32,000, respectively. The number of employers with workers on payroll also slipped 164,000 while self-employers with no paid hires rose 153,000, reflecting the hardship of small businesses from increased labor costs after double-digit minimum wage hikes.

The employment rate of Koreans aged 15 to 64 – the standard of the Organization for Economic Cooperation and Development – was 66.7 percent in January, the highest January figure since 1989 when data compiling first started.

The unemployment rate was 4.1 percent, down 0.4 percentage point from the same month a year ago.