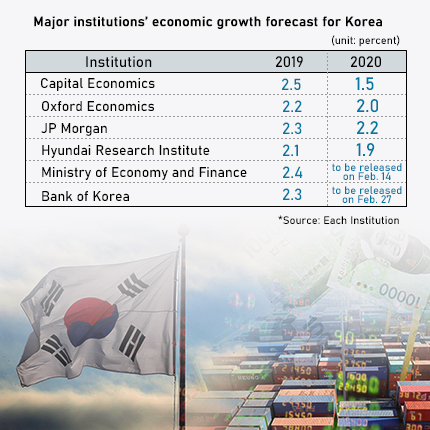 이미지 확대
China-originated coronavirus outbreak is expected to interrupt the feeble recovery of the Korean economy which performed at its worst in a decade last year, given its heavy reliance on its neighboring giant that makes a quarter of Korean external trade.

Local and foreign institutions have all turned negative about prospects of the economy performing better than last year’s 2.0 percent.

State think tank Korea Development Institute (KDI) in latest growth outlook report released on Sunday turned reserved about a recovery in just a month after mentioning positive signs in the economy finally pulling out of a 14-month downturn.

“A negative impact from the epidemic outbreak is inevitable and will influence economic performance,” it said in monthly report for February.

“Whether the signs of recovery in domestic output, consumption and investment in the beginning of the year can be sustained has become doubtful,” said Kim Sung-tae, analyst at KDI.

London-based economic research consultancy Capital Economics slashed 2020 growth outlook for Korea to 1.5 percent from its previous forecast of 2.5 percent. It was the company’s third-largest cut for an Asian economy.

Korea’s intermediate goods imports from China and Hong Kong reached $67.3 billion worth per year, the world’s second largest after the United States, noted the British institute. Of the total, 28.4 percent comes from China, showing its heavy reliance on the world’s second-largest economy, it added.

Moody’s Investors Service warned of downgrades in credit ratings of Korean corporate names if the impact from virus turned out greater. 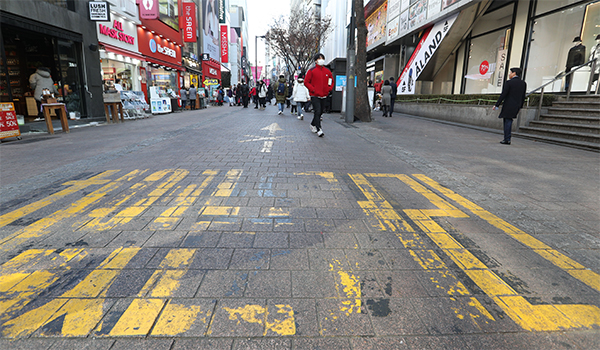 At home, Hyundai Research Institute forecast a serious blow to the Korean and global economy from the epidemic outbreak. “The reliance of the global economy and the manufacturing industry on China has significantly increased,” noted an analyst, adding “The potential economic damage from the new coronavirus would be bigger than that from the SARS outbreak in 2003.”

China accounted for 16.3 percent of global GDP in 2019, up from 4.3 percent in 2003 and is responsible for about 10 percent of global commerce, doubled from 2003. Given the significant size of the Chinese economy and Korea`s hefty reliance on the country in trade, Korea’s economic growth could be reduced by 0.1-0.2 percentage point this year, according to the institute.

The growing pessimism has built up market expectations for another rate cut from the Bank of Korea on Feb. 27, the last monetary meeting in the first quarter. The rationale to push the base rate to the untested level of 1.0 percent could become stronger if there is the possibility of the gross domestic product turning negative in the first quarter.