The government is charging nearly $3 billion on wireless carriers for 3G and 4G frequency bands, which could translate into higher phone bills for consumers.

The Ministry of Science and ICT on Tuesday announced that it would bill minimum 3.2 trillion won ($2.9 billion) for 3G and LTE bandwidths over next five years, more than doubling 1.6 trillion won the three carriers estimated.

The license for 3G and LTE bands expire in June and December next year, respectively.

Wireless carriers oppose to the excess billing as they cannot surrender earlier-generation networks due to existing customers and at the same time must continue investment to enhance 5G quality. 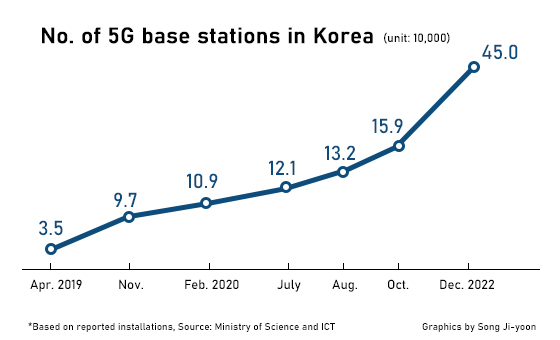 이미지 확대
They argue 5G migration and upscaling could be sacrificed by the overspending to sustain earlier networks and also lead up to higher phone rates.

They also resist to the demand of installing 150,000 5G-network stations by the end of 2022, considering the fact that it had taken the telcos about eight years to establish the same number of LTE stations. Industry insiders say it is hardly possible for each company to build a maximum of 100,000 stations by 2022 even if the three pour in 25.7 trillion won they have pledged to invest on 5G networks.

SK Telecom, KT, and LG Uplus invested total 8.7 trillion won and set up 110,000 5G stations combined last year. Their 5G investment for this year has been about the same as last year.