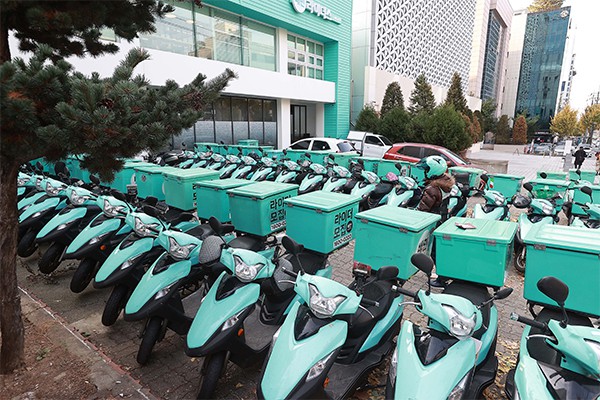 The merger of two largest delivery platforms in South Korea faced an administrative setback after the local antitrust agency ordered Delivery Hero (DH) to let go of No. 2 Yogiyo if it wants No. 1 Baedal Minjok, opposing German ownership of the two due to monopoly concerns.

DH on Monday announced in its website, it was notified by the Korea’s Fair Trade Commission (FTC) that its acquisition of Woowa Brothers which manages Baedal Minjok would be okayed on the condition that it loses smaller peer Yogiyo already under the German family

The FTC’s decision to give DH a conditional approval for the merger of Baedal Minjok and Yogiyo was derived from concerns that the union of the country’s two largest delivery apps that account for more than 90 percent of the entire Korean food delivery market would undermine fair competition and lead to higher delivery and order commission fees based on monopoly.

In response to the FTC’s decision, DH Korea said it cannot accept the condition to sell Yogiyo although it has not received any specific guideline from its headquarters in Germany.

An unnamed official from DH Korea said that if it sells Yogiyo, the company can’t expect any business synergy from the acquisition of Woowa Brothers. It will also be of no benefit to those involved including self-employed, riders, and consumers, the official noted.

The official said that the company will raise an appeal and persuade FTC members at the meeting next month.

An unnamed official from Woowa Brothers declined to comment on the latest development, saying that the merger is an issue between the FTC and DH. 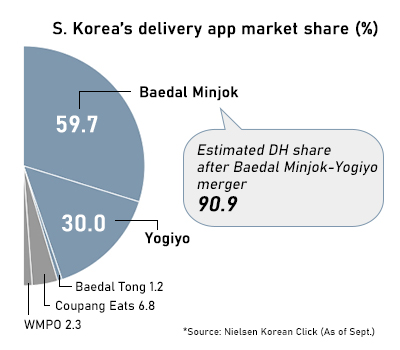 이미지 확대
Instead of selling Yogiyo, DH could propose alternative measures such as selling other assets, overhauling its commission fee system, or presenting other social contribution plans to keep Baedal Minjonk and Yogiyo together under its arm, according to foreign media.

The FTC plans to decide on whether to approve the merger or not after reviewing opinion to be presented by DH on its conditional approval and holding a meeting as early as Dec. 9. The FTC will present final conditions, if any, on the merger.

The FTC’s conditional approval came as a surprise. Initially, industry insiders expected that the FTC would propose a cap on commission hikes by Baedal Minjok and Yogiyo for the approval, given that new business operators such as Coupang Eats have been aggressively expanding their presence in the local delivery app market, easing monopoly concerns.

The combined market share of Baedal Minjok, Yogiyo, and Baedal Tong hovers slightly above 90 percent – lower than 98 percent as of the end of last year when the merger announcement was made between DH and Woowa Brothers.