이미지 확대
South Korean economic rebound after a contradiction this year would be a modest 3.1 percent next year and may need continued stimuli, although the government would have to watch its widening deficit, said state think tank Korea Development Institute (KDI).

In gross domestic product (GDP) outlook and policy recommendation for 2021, KDI projected a 3.1 percent growth in 2021 after this year’s estimated 1.1 percent negative growth. The 2021 outlook was revised down from 3.5 percent estimated September.

The KDI forecast exports will grow 3.1 percent next year, 0.3 percentage points lower than its previous outlook. The country’s current account is projected to remain at similar level of $57.9 billion with the previous’ $58 billion. 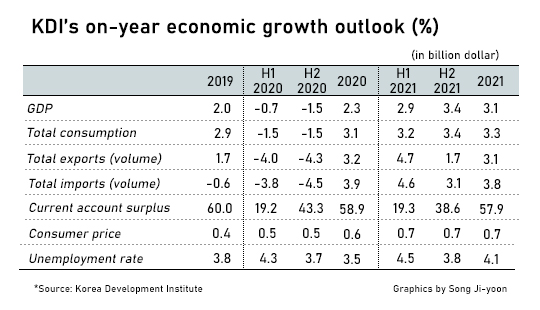 이미지 확대
The think tank projected the number of employed people to fall 170,000 this year worse than earlier estimated 150,000 and add 100,000 next year, fewer than earlier 150,000. Unemployment rate would be higher at 4.1 percent next year from 4.0 percent this year on increased participation in economic activity.

On policy, KDI advised the government to keep up stimuli as the speed of economic recovery next year could fall short of expectations. But it stressed more discretion in spending in view of the pace of debt growth.

National debt would stretch to 864.9 trillion won this year and debt-to-GDP ratio to 43.9 percent from last year’s 37.7 percent.

Jung Kyu-chul, head of KDI economic outlook division, said that recovery would be slower if the country fails to respond well to the resurging Covid-19 and if vaccines are not supplied at an expected time. He said that in the opposite case, the economy will recover faster.

“Since spending cut and tax revenue alone cannot offset the growth in debt, Korea in the long term needs to discuss tax hikes,’ he said.