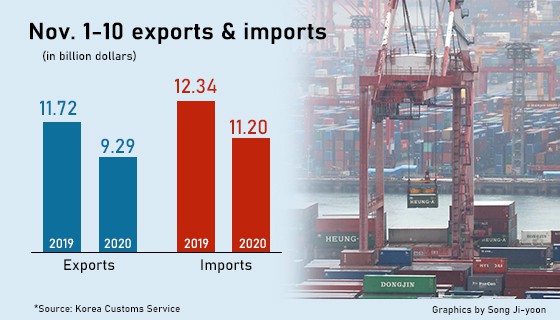 이미지 확대
South Korea’s exports in the first 10 days of November jumped 20.1 percent from the same period last year, the biggest on-year gain since the Covid-19 outbreaks, thanks to the robust demand for chips, wireless communications devices and cars.

According to data released by the Korea Customs Service on Wednesday, the country’s exports totaled $14.1 billion in the Nov. 1-10 period, the largest since September with $14.9 billion worth exports for the same period. It was a whopping 20.1 percent higher from a year ago, marking the biggest growth for the first 10 days since February this year.

The last time exports jumped more than 20 percent was November 2018 on a monthly basis.

Daily exports averaged $1.88 billion, also up 12.1 percent from a year earlier based on 0.5-day longer working days from a year ago.

Korean exports had contracted for six consecutive months from March to August. Outbound shipments rebounded in September for the first time since the virus outbreak but retreated again in October.

The gain in exports in the first 10 days of November was mainly driven by the robust demand for mainstay export items such as chips, wireless communications devices and automobiles.

By country, exports to the United Station added 23.5 percent over the same period, the European Union 40.5 percent, China 14.5 percent and Vietnam 15.8 percent. Shipments to Japan, however, slid 7.4 percent, and the Middle East 4.5 percent.

Imports in the first 10 days of November also added 7.8 percent on year to $13.3 billion, delivering a trade surplus of $760 million.