South Korea’s consumer prices jumped 1.5 percent in January, the largest rise in 14 months fueled by strong local fresh produce prices as the base effect of 2018’s high inflation is starting to wear off.

Statistics Korea said Tuesday the country’s consumer price index (CPI) in January was 105.79, up 1.5 percent from the same month a year ago.

This was the largest monthly increase since January 2018 when the index rose 2.0 percent. The CPI has remained below 1 percent throughout last year, with price growth slowing to zero in August and dipping 0.4 percent in September to mark the country’s first-ever negative inflation. Prices remained flat in October but inched up 0.2 percent in November and 0.7 percent in December.

Whether inflation will keep up the upward momentum towards the annual target of 2 percent remains to be seen as consumption is expected to take a dip from the spread of the deadly coronavirus.

The central bank last month held the interest rate steady after delivering two cuts last year that brought the policy rate back to a historic low of 1.25 percent. The next rate-setting meeting is scheduled for Feb. 27. 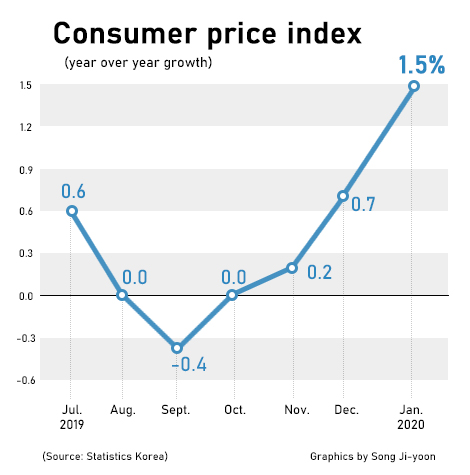 이미지 확대
The CPI without food and energy, the standard by the Organization for Economic Cooperation and Development (OECD), rose 0.8 percent in January after gaining 0.6 percent in the previous month. Core inflation, excluding volatile agricultural product and oil prices, added 0.9 percent after climbing 0.7 percent in December.

“The surge of agricultural prices in 2018 and increased state welfare like free education and extended health coverage all contributed to lowering the inflation rate last year,” said Ahn Hyung-joon of Statistics Korea. “But prices are now led by higher vegetable prices due to poor crop yields and international oil prices.”