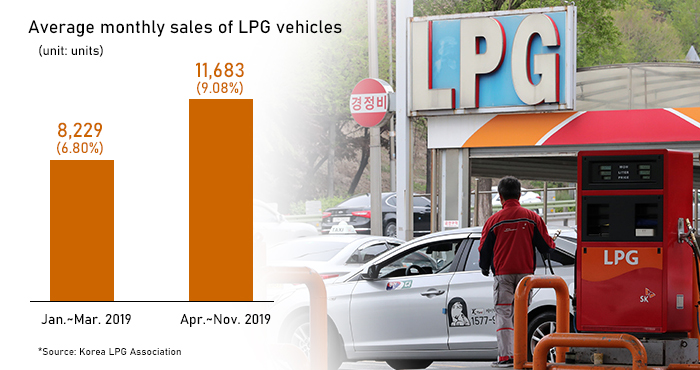 이미지 확대
Sales of liquefied petroleum gas (LPG)-powered vehicles zoomed in South Korea after the government liberalized the segment to retailers in March last year, giving carmakers a reliable option during the transitional period when vehicles shift from traditional fuel to electricity.

According to the Korea LPG Association on Sunday, monthly sales of LPG vehicles in Korea averaged 11,683 units from April to November last year, up 42 percent from the average monthly sales of 8,229 units in the first three months before the deregulation in March.

LPG vehicles took up a 9.08 percent share in the total vehicles sold in the period, rising from 6.8 percent in the first three months.

The monthly decrease in the number of LPG cars registered in Korea also slowed to 1,622 units from 5,390 units over the cited period.

More drivers are opting for the vehicle type since the government lifted barriers in consumer purchase of LPG vehicles, said the association.

Seoul restricted LPG fuel to taxis, rental cars and vehicles for disabled people for many years, but it removed the regulation to promote eco-friendly car fuel amidst pollution from fine dust. LPG-powered vehicles emit less dust and pollutants like nitrogen oxides, compared to diesel-fueled cars.

The Ministry of Environment is planning to increase subsidies for those who purchase a new 1-tonned LPG truck to replace their old diesel vehicles. Buying a LPG truck would cost around 8.98 million won ($7,512.76) cheaper than a diesel car, according to industry experts.

Driving an LPG truck after replacing an aged diesel car can reduce an average 2-4 kilograms of particulate matter (PM) emissions, according to the Ministry of Environment. Of all 300 owners who replaced the car, 63 percent expressed satisfaction on their purchases, citing less noise and low fuel costs, according to a survey conducted jointly by the Korea LPG Association and the ChildFund Korea.

Currently, a total of 2,714 LPG vehicles are on roads of about 70 countries across the world, of which 71 percent in European countries on the back of strong government subsidies. The U.S. also is seeking more supportive measures with subsidy for school buses powered by LPG.