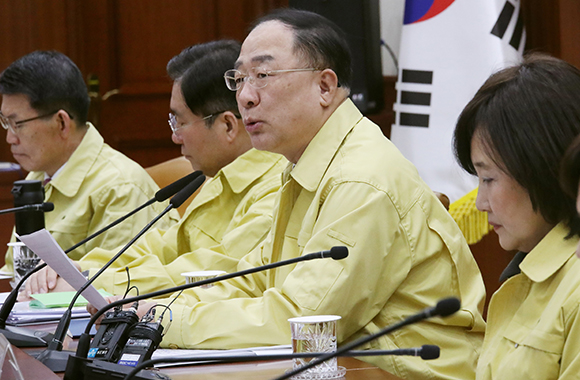 S. Korea’s Finance Minister Hong Nam-ki speaks at a meeting of economy-related ministers at the government complex in Seoul on Feb. 3, 2020. [Photo by Yonhap]

The South Korean government on Monday vowed to do its utmost to prevent spread of the new deadly coronavirus as it fears “downside risks” to the fragile economy that finished last year at its poorest growth in a decade.

“The impact of the arrival of the new epidemic has been limited so far, but if it is not combated at early stage, it could translate into downside risk,” said Hong Nam-ki, deputy prime minister in charge of the economy in an economy-related cabinet meeting.

“The most important role of the government for now is to stop the spreading of the novel virus and put an early end to the situation without any death by applying prevention measures,” He emphasized, adding “We have to minimize the risk to keep up the economic recovery momentum.”

Hong also anticipated that the accelerated spread would cause economic hiccups in China and that could trigger “a chain reaction both in the global economy and the domestic economy,” which poses a threat to the Korean economy.

“Korea’s reliance on the Chinese economy has grown significantly,” said Hong. “The government will go all-out efforts to study every possible scenario to minimize the damage.”

In the case of the SARS epidemic in 2003, Korea analyzed the impact to the local economy in three sectors – the decline in inbound travelers to the country, softening domestic consumption, and export contraction from weak demand and supply in the epicenter of the virus outbreak. 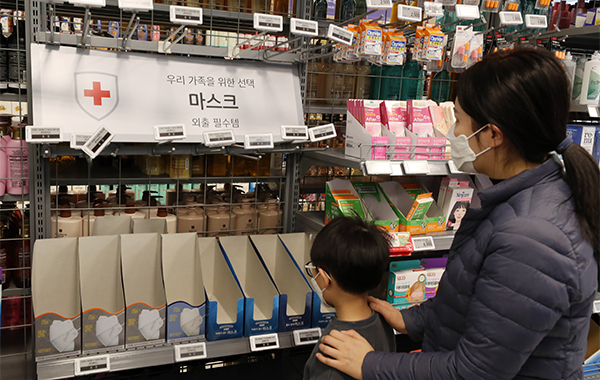 Seoul currently is studying the case with separate teams under different divisions, with plans to build a supportive action for export companies within this month and inject additional funds in businesses that could take a direct hit from the current situation.

“There’re no expected shortages in mask supply and the government will take additional steps to ramp up production of surgical face masks,” said Hong.

The government will also take action to prevent price-fixing of hygiene products such as masks and sanitizers and punish those who are rigging their prices, if needed, according to Hong.

By Moon Jae-yong and Lee Ha-yeon