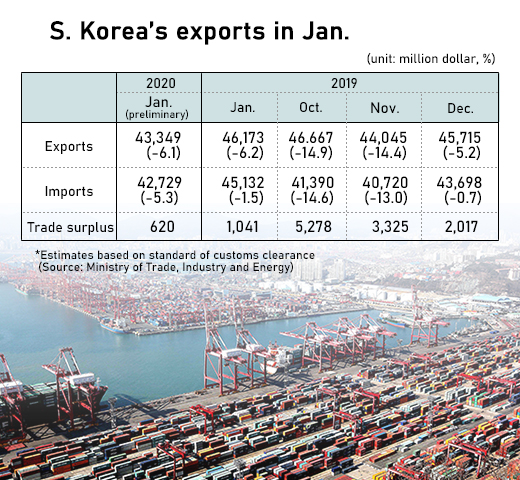 이미지 확대
South Korea’s exports fell for 14th straight month in January, dashing hopes for a rebound from early this year amid fresh challenges from the outbreak of a new epidemic in China, its biggest market.

The country’s exports fell 6.1 percent on year to $43.35 billion in January, according to the Ministry of Trade, Industry and Energy data released on Saturday, widening from a 5.2 percent drop in December but improved from the double-digit downturns since June.

Average daily exports rose 4.8 percent on year, the first gain in 14 months with the calendar effect eliminated. There were 21.5 working days in January, 2.5 days fewer compared to last year, due to change in dates of the Lunar New Year holiday.

Most of the country’s mainstay exports stayed sluggish even before the spread of the novel coronavirous outbreak.

Outbound shipments of semiconductors, accounting for one-fifth of Korea’s total exports, fell 3.4 percent against a year earlier. It was the smallest decline in 14 months.

이미지 확대
The Korean trade ministry earlier had projected the country’s exports to recover from February on expectations for recovery in global memory chip demand. But the coronavirus outbreak is likely to stall the rebound, given the country’s heavy reliance on China for trade.

“China is the largest importer of Korea’s semiconductors,” said Kim Yang-pang, senior researcher at the Korea Institute for Industrial Economics & Trade. “Novel coronavirous outbreak is likely to deal a direct blow to the exports.”

The National Assembly’s budget office estimated Korea’s exports to China to fall 0.5 percent and the country’s gross domestic product to contract 0.2 percent if China’s GDP retreats 1 percent due to the coronavirus outbreak.

Korea’s imports in January totaled $42.73 billion, off 5.3 percent from a year earlier, to bring trade balance to a $0.62 billion surplus, staying in black for the 96 month in a row.