이미지 확대
Hydrogen will be separated from South Korea’s renewable portfolio standard from 2022 requiring state utilities to meet a certain quota in the fuel purchase separately from other renewable sources as a part of the state initiative to promote hydrogen economy.

Under five agendas that were approved by the government during its second Hydrogen Council meeting at the Seoul government complex on Thursday, the government has decided to introduce Hydrogen Portfolio Standards (HPS) by 2022 with an aim to systematically expand supply of hydrogen fuel cell – which is key to boosting hydrogen economy. HPS involves creating a separate mandatory supply market by splitting fuel cell from existing Renewable Portfolio Standard (RPS) that includes solar and wind energy.

The meeting was joined by Hyundai Group Chairman Chung Euisun who was promoted to chairmanship on the previous day. Hyundai is responsible for production of hydrogen vehicles and fuel.

The government plans to amend the country’s hydrogen economy promotion and hydrogen safety management law by next year and include mid- to long-term supply obligation in hydrogen basic plan under the hydrogen act. It plans to purchase environmentally-friendly and dispersal type fuel cell energy through auction.

The government has set an aim to reach 8 gigawatt fuel cell supply volume by 2040 and create 25 trillion won in investment over the next 20 years. 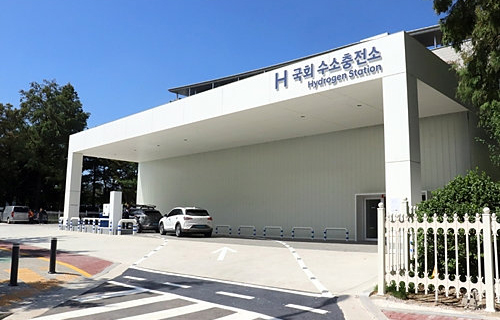 이미지 확대
The government will also temporarily reduce public charge and tax on natural gas for hydrogen manufacturing use with vehicle charging purpose.

It also plans to set up Ansan, Ulsan, Jeonju, Wanju, and Samcheok as hydrogen-specialized regions where incentives such as financial support will be provided.

The government’s hydrogen-related budget will also be significantly increased from 587.9 billion won this year to 797.7 billion won next year. It will also establish a special purpose company Korea Hydrogen Energy Network (Kohygen) by collaborating with regional governments and private entities to establish hydrogen charging stations for commercial vehicles in cities. A total 330 billion won worth of expenses will be injected – 167 billion won government subsidy and 163 billion won investment. Private companies will decide whether or not to take part in the special purpose company in November before official inauguration of Kohygen in February, next year. The company will aim to set up 35 hydrogen charging stations for commercial vehicles such as buses and trucks.