According to data released by the Bank of Korea, outstanding household debt totaled 957.9 trillion won ($833.3 billion) as of end of September, up 9.6 trillion won from a month ago. The monthly growth is the second largest after August and the largest for the month of September since the central bank began compiling related data in 2004.

The steep growth was mainly led by an increase in mortgage-backed borrowings that added 6.7 trillion won in September and other loans such as credit loans that gained 3 trillion won – both the largest growth for September since 2004.

The on-month growth in mortgage-backed lending was the fifth-largest after 8 trillion won growth in April, 2015, while other loans ninth-largest.

The growth in other loans was mainly led by frenzied borrowing to subscribe for blockbuster stocks like Kakao Games and housing offerings.

Lending pace is expected to slow from October as banks have turned stricter on consumer loans upon order from the financial authority, a BOK official said.

Still, household funds is in greater demand in the fourth quarter.. 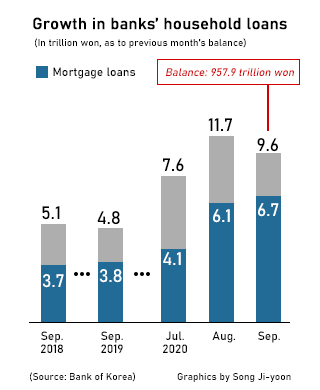 Loans extended to large companies fell in September amid slowdown in working funds and temporary repayment in the quarter end. Loans to small- and mid-size enterprises, however, added 7.3 trillion won in September, up from 6.1 trillion won growth in August.

The growth in loans extended to small- and mid-size enterprises was the largest for the month of September since 2009.

The BOK said that demand for funds is higher among small businesses than large ones as they struggle from the impact of resurging Covid-19. The government’s financial support measures also focused on small- and mid-size businesses, leading to a surge in loans.